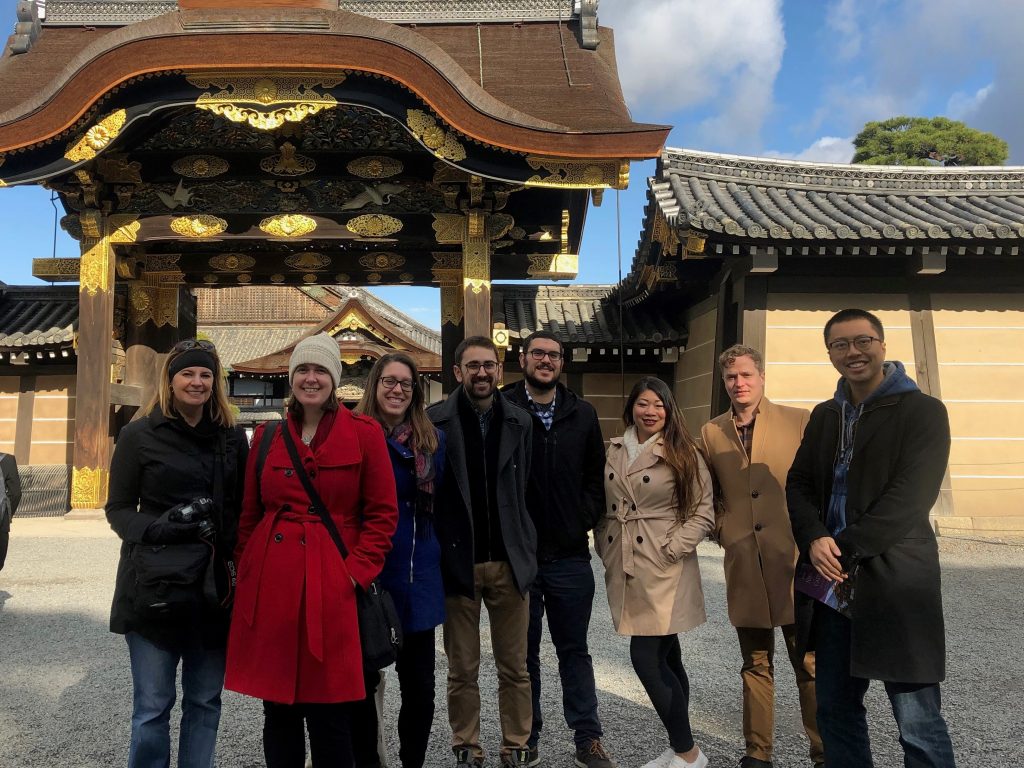 From December 8-15, 2018, eight rising U.S. journalists covering U.S. national security and defense issues participated in a week-long study trip to Japan as part of the Sasakawa USA Emerging Experts Delegation (SEED) program. The delegates, most of whom traveled to Japan for the first time, participated in the trip to deepen their understanding of the role of the U.S.-Japan alliance in the Indo-Pacific region and Japan’s evolving defense and security posture. The journalists spent a short but very busy week in Japan including a series of meetings with leading Japanese security and defense experts and officials, briefing and tour at Yokosuka’s Japan Maritime Self Defense Forces (JMSDF) and U.S. Naval Forces Japan bases, and a visit to Kyoto. 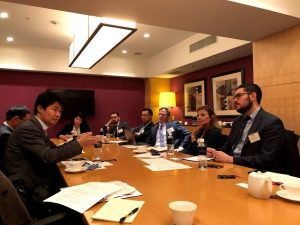 The delegation kicked off the trip in Tokyo with a meeting with prominent Japanese journalists to discuss their views on Prime Minister Abe’s potential legacies, Japanese public opinion on the Abe government’s foreign policies, and Japan’s nuclear energy issues. Later, the group visited the Prime Minister’s Office, the Ministry of Defense and the Joint Staff, the Ministry of Foreign Affairs, and the National Security Secretariat to hear the views of prominent officials on regional security challenges, U.S. foreign policy, and their policy implications for Japan and the U.S.-Japan alliance. 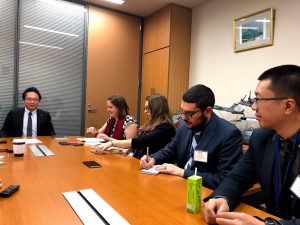 In addition, while in Tokyo, the journalists had opportunities to engage in in-depth discussions on the issue of North Korean abduction of Japanese citizens as well as Japan’s cybersecurity efforts in both the public and private sector including efforts in preparation for the Tokyo 2020 Olympics and Paralympic Games. The group also sat down with House of Representative members including the Honorable Keitaro Ohno from the Liberal Democratic Party (LDP), who served as Parliamentary Vice-Minister of Defense of Japan, and the Honorable Shinichi Isa from LDP’s coalition party, the Komeito Party. The two meetings offered each party’s views on the prospect of revising Japan’s Constitution as well as Japan’s defense priorities and procurement plans to be laid out in the new National Defense Program Guidelines. Sasakawa USA also co-hosted a roundtable discussion with its sister-organization in Japan, the Sasakawa Peace Foundation, for the delegation to meet with leading Japanese scholars and commentators and exchange views on regional security concerns, U.S.-China trade issues and their impact on Japan, as well as U.S. domestic politics. 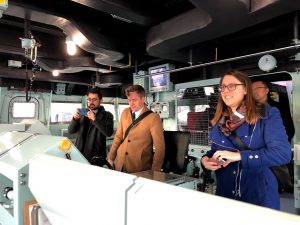 As a major highlight of their Japan itinerary, the delegation took a day trip to Yokosuka in Kanagawa prefecture to visit the base of the Japan Maritime Self-Defense Forces (JMSDF) and the base of the U.S. Naval Forces Japan (CNFJ).  On the JMSDF base, the group was treated to a special tour of the news-making Izumo-class helicopter destroyer. On board Izumo, JMSDF officers briefed the group on Japan’s “Free and Open Indo-Pacific Strategy” and how the strategy is operationalized. On the U.S. base, the group received a briefing on the role of U.S. Naval Forces Japan (CNFJ)/ Navy Region Japan (CNRJ), and joined a tour of the nuclear-powered RSS Reagan, the U.S. Navy’s sole forward-based carrier strike group home-ported at Yokosuka. The visits to both bases offered participants the opportunity to observe and appreciate the foundation of the U.S.-Japan alliance.

Following a series of policy discussions in Tokyo and Yokosuka, the group ended their trip with an overnight trip to Kyoto, where they learned more about Japanese history and traditional culture. The visit to the old capital included stops at the Nishiki Market, Ryoan-ji (rock garden) and Kinkaku-ji (Golden Pavilion) temples, the Nijo Castle, and Sanju-Sangendo. In the evening, the group visited Arashiyama to walk through a special night illumination at its moon crossing bridge and bamboo forest, and stayed at a traditional Japanese inn in Kyoto’s famous Gion district. While sightseeing Kyoto’s famous sites, the group continued its study and had lunch discussions with distinguished professors from two of Kyoto’s most renowned universities, Kyoto University and Doshisha University on Japanese domestic politics, society, and pre-WWII history.

Throughout the trip, the journalists observed first-hand Japan’s strengths and challenges as a nation and as a U.S. ally. In particular, the meetings sparked interest among the participants regarding Japan’s aging population, its plans to increase foreign workers, and the implications for Japan’s future society and economy, self-defense forces and security. Their thoughts on Japan’s future defense orientation and regional threat perceptions were further sharpened through their exposure to Japanese views on the operational and practical impact of a possible Constitutional revision and Japanese perceptions not only of China and the two Koreas, but also Russia. Through discussions to share their own views with their Japanese interlocutors about U.S. domestic politics and foreign policy under the Trump administration, the delegates also had a chance to reflect on the impact of these developments on U.S.-Japan relations. As a culmination of the trip, the delegation members will be writing short articles and blog posts on U.S.-Japan relations based on what they learned from the trip to share with a broader audience.

The trip motivated the delegation members to continue their exploration of Japan by increasing their knowledge of Japan and connecting them to leading Japanese thought leaders and policymakers in the government, SDF, academia/think tanks, and the private sector who can serve as valuable resources for their work. Many of the journalists expressed their desire to return to Japan in the near future and their commitment to cultivate relationships with more Japanese experts and officials.  Sasakawa USA looks forward to following up with the delegation members to continue to engage them on Japan and U.S.-Japan relations.

• Alex Ward, International Security and Defense Staff Writer, Vox, published “The rise of Japanese militarism: What the growth and change of Japan’s armed forces means for the world,” on  Vox.com on April 30, 2019.

• Tara Copp, Pentagon Bureau Chief, Military Times, published “How will Japan defend itself if it can’t get its youth to serve?” in Military Times on January 30, 2019. (The full text of the article was also re-published in the In the News section of the Sasakawa USA website.)

• Catherine Putz, Managing Editor, The Diplomat, published “The Art of the Balance: Japan, China and the United States” in The Diplomat on January 30, 2019. (The full text of the article was also re-published in the In the News section of the Sasakawa USA website.)

• Mackenzie Weinger, Policy Editor, National Journal, published “Why Japan Will Spend Billions on F-35s” in the National Journal on December 19, 2018. (The full text of the article was also re-published in the In the News section of the Sasakawa USA website.)