The Art of the Balance: Japan, China and the United States

Catherine Putz, Managing Editor for The Diplomat, was one of eight rising U.S. journalists covering U.S. national security and defense issues who participated in a week-long study trip to Japan in December 2018 as part of the Sasakawa USA Emerging Experts Delegation (SEED) program. Putz published “The Art of the Balance: Japan, China and the United States” in The Diplomat on January 30, 2019.

The Art of the Balance: Japan, China and the United States 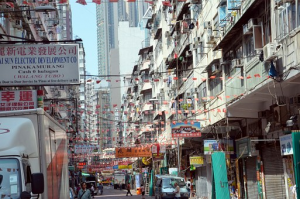 It’s no easy thing to balance a distant ally with a worrisome close neighbor.

By Catherine Putz, The Diplomat

There’s a delicate balance to relations between Japan and China. Economic realities are weighed against security concerns; a desire for maintaining the status quo balanced against long-term worries that China is a future threat and the United States a potentially unreliable ally.

When looking out from Tokyo, the strategic threats and security concerns that rest on the horizon range from the immediate and tangible — North Korea, which in 2017 sent two ballistic missiles flying over Hokkaido into the Pacific — to the inconvenient legacies of an unsigned peace treaty with Russia — an ongoing territorial dispute blocks the path to a peace treaty.

Perennial debates about the sustainability of the American commitment to its Asian allies, exacerbated by U.S. President Donald Trump’s capricious diplomatic style and repeated criticisms of U.S. allies not paying a fair share of defense costs — Japan and South Korea, specifically — only serve to emphasize for Japan the importance of maintaining balance in its regional relations.

“Face to face, we are smiling; but under the table… we are kicking each other,” Keitaro Ohno, at the time the parliamentary vice minister of defense for Japan’s ruling Liberal Democratic Party, told a group of U.S. journalists in December, summarizing the reality of Japan’s balancing of economic interdependence and security concerns with regard to China.

“China is — and will be — an indispensable economic partner for Japan,” Sheila Smith, a senior fellow for Japan studies at the Council on Foreign Relations, said in an email to The Diplomat. “Economic interdependence has not gone away; if anything, it has become more important to Tokyo to maintain it.”

China was Japan’s second largest export partner, after the United States, from 2011 up until the end of the 2017 fiscal year in March 2018. According to the Japanese Ministry of Finance in April 2018, Japan’s exports to China soared to $141 billion in FY2017, a 18.3 percent increase over FY2016. Meanwhile, exports to the United States continued to grow, but at a slower pace of 7.5 percent over the previous fiscal year, coming to just over $140 billion.

The news in FY2018 to date, however, hasn’t been good for Japan. For example, in September 2018 Japanese exports fell 1.2 percent over the previous year — the first tumble in export stats since November 2016. As of the end of November 2018, Japanese exports had notched a measly 0.1 percent year-on-year increase.

Trump’s occasional harping on the imbalance in Japan-U.S. trade and threats of tariffs on Japanese-made automobiles have had a chilling effect in part because trade-related threats from the White House have been pursued in ways other comments from Trump have not. From Trump’s announcement, three days after taking office, of U.S. withdrawal from the Trans-Pacific Partnership, to the pursuit of a trade war against China, trade issues are key for the American president.

After two years of dodging bilateral trade talks with the United States, Japan finally agreed in September 2018 to take the Trump administration up on its preferred vehicle for trade relations.

The slowing of the Chinese economy is also of deep concern for Japan.

Although officially announced statistics posit a general slowing of growth to 6.5 percent as of the third quarter of 2018, unofficial accounts paint a much darker outlook. At least one Chinese economist has suggested that the real growth rate in China is zero. The implications of a Chinese decline, let alone a collapse are frightening.

In December, Dr. Akio Takahara, a professor of contemporary Chinese politics at the University of Tokyo, told a group of U.S. journalists that “The [global] interdependence with China has grown to such a level that if China collapses then we will all suffer very, very much,” Takahara said that Japan faces a dilemma, arguably so do China’s other neighbors and the United States.

While Japan doesn’t want to see China become more aggressive, “If China grows, it will grow its military might and do things [with it].” But, he went on, “does that mean we should crush China? I don’t really think so. I think we have to learn how to manage the difficult parts and maintain peace.”

One difficulty is the burden of history. While the Japan of today is a democracy; the Japan that haunt’s China’s (and Korea’s) not-so-distant pasts was a tyrant. In 1910, Japan annexed the Korean Peninsula after helping wrest it from China’s sphere of influence 15 years before. In 1931, Japan invaded Manchuria and by 1937 China and Japan were at war, again. In 1941, with Japan’s attack on Pearl Harbor, the ongoing conflict in East Asia — in which the United States and Soviet Union had been aiding the Chinese against the Japanese — merged with World War II. The period had no shortage of brutal acts. Across East Asia, historical issues continue to complicate Japan’s contemporary relations whether it’s the comfort women issue when dealing with South Korea, or the ghosts of the Nanjing Massacre haunting relations with China.

Another difficulty is the unavoidable tension between democracy and autocracy. In contemporary terms, democracies like Japan and the United States are concerned that autocracies like China won’t follow a “rules-based order” or are actively seeking to upend that order. In that vein, democracies see their efforts to build communities of cooperation as necessary to sustaining global stability and meeting myriad international challenges; autocracies, however,  view such coalitions with deep suspicion, their central emphasis on democracy a direct challenge.

In comments to a group of U.S. journalists in December, Keitaro Ohno, now the LDP’s acting director of the foreign policy division and deputy chief secretary of the security research committee, characterized Beijing’s 2018 friendliness toward Japan as in part a response to Chinese shock over the aggressiveness of the Trump administration’s pursuit of a trade war.

The Chinese were, he suggested, “shocked and surprised by Trump’s actions” and were subsequently ”very suddenly friendly to us.”

As the trade war accelerated from a threat to reality, with tariffs levied first on foreign-produced solar panels and washing machines, then steel and aluminum, then progressing to directly targeting Chinese goods, Japanese Prime Minister Shinzo Abe pursued a course of diplomatic engagement with China’s Xi Jinping (while also maintaining a regular schedule to meetings with Trump).

Abe, who rose (back) to power in 2012, tried early on to engender a normalization of relations with China. But as noted in a commentary published by the Japan Times last month by former editor of the Asahi Shimbun, Yoichi Funabashi, meetings following Abe and Xi’s first formal talks on the sidelines of the November 2014 Asia-Pacific Economic Cooperation summit in Beijing (Reuters referred to their handshake there as “awkward”), were brief and according to Chinese media, initiated by the Japanese.

“This time, however, the Chinese took the initiative,” Funabashi wrote “I was told by sources in the know that at a high-level foreign policy meeting in June, government and Communist Party members decided to respond to the dangers posed by the Trump administration by improving relations with China’s neighbors, particularly Japan and India.”

In September, Abe and Xi met on the sidelines of Russia’s Eastern Economic Forum in Vladivostok and in October Abe traveled to Beijing, billed as the first Japanese prime minister to do so since 2011. This year’s G-20 Summit is scheduled for late June in Osaka. If Xi attends, as diplomatic sources suggest he might, he’d be the first Chinese leader to visit Japan since Hu Jintao in 2008.

“Japanese economic growth now depends on its ties to China. But the strategic tensions are structural, and are not likely to dissipate,” Smith noted.

Ohno, as noted above, commented on China’s relatively friendly attitude toward Japan over the course of 2018. But, he continued in the next breath, “when it comes to the security environment, [Chinese] activity in the South China Sea and the East China Sea are still going on and not changed.

“Face to face, we are smiling; but under the table… we are kicking each other,” he summarized.

The kicking under the table is typified by incursions of Chinese vessels and aircraft into what the Japanese claim as sovereign territory. The territorial dispute between Japan and China regarding the Senkaku/Diaoyu islands and the extent of each country’s exclusive economic zone (EEZ) in the East China Sea is a closely watched flashpoint between the two.

That said, there’s a rehearsed nature to Chinese incursions and the Japanese response; a careful dance that sets out each side’s claims but at the same time attempts to avoid sudden escalation. In this vein last year, the two sides agreed to set up a security hotline to help defuse any possible maritime confrontations after a decade of negotiations.

“If Beijing continues along its current path, Japan’s future could be increasingly shaped by Chinese decisions. Trying as much as possible to shape those decisions is a priority for Japan, and will be from here on out,” Smith commented.

“Tokyo cannot do it alone; it must seek the help of others who have a similar worry about China’s future trajectory,” Smith said. Japan, she went on, is well placed to help organize regional cooperation. “Whether in trade, development financing, maritime security or mitigating environmental degradation, most of Asia’s future problems demand cooperation among the countries of the region.”

In meeting after meeting with Japanese policymakers, academics, and commentators questions about how the Japanese view Donald Trump and his presidency were lofted by U.S. journalists. More often than not, the questions were diplomatically avoided or answered gently. For Japan, the U.S. alliance is critical — more so given China’s rise — and that fact persists no matter who sits in the White House.

“On the one hand, U.S.-Japan ties have deeper roots to keep our alliance steady and one president (or prime minister for that matter) cannot up end it so easily,” Smith replied when asked how Trump’s transactional style had impacted Japanese strategic considerations. “But the question for Tokyo, I imagine, is whether Trump represents a deeper impulse of the American people.”

The debate about the sustainability of the American commitment to its Asian allies is as old as those alliances, but the Trump presidency has brought new urgency to the conversation. If Washington puts “American First,” where do its alliance commitments figure? For those considering Japan’s strategic outlook, the core concern is not Trump’s bombastic style or even pressure on trade relations, but that he is far from a temporary phenomena.

“Are Americans tired of their global leadership role? Do they no longer want to expend their resources — financial, military, soft power — on shaping a world or a regional order? If this is what the Trump presidency represents, then it does suggest Japan’s postwar formula of dependence on the U.S. for strategic ballast may need rethinking,” Smith said, echoing comments made by several interlocutors in Japan.