How will Japan defend itself, if it can’t get its youth to serve?

Tara Copp, Pentagon Bureau Chief for Military Times, was one of eight rising U.S. journalists covering U.S. national security and defense issues who participated in a week-long study trip to Japan in December 2018 as part of the Sasakawa USA Emerging Experts Delegation (SEED) program. Copp published “How will Japan defend itself, if it can’t get its youth to serve?” in the Military Times on January 30, 2019.

How will Japan defend itself, if it can’t get its youth to serve? 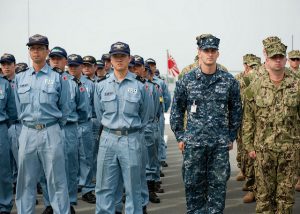 With population aging and youth uninterested in military, who will defend Japan?

Hideaki is exactly the type of citizen Japan’s military needs to recruit. Japan’s population as a whole is dropping, but the drop is especially notable among those aged 18 to 32, Japan’s recruitment eligible. That population has fallen from 9 million in 1994 to 5.6 million in 2018, Japan’s defense ministry said. Its Self Defense Forces have missed annual enlisted recruiting goals for a number of years. The average age of the Self Defense Forces is over 35 now.

But it’s not just a numbers problem. As a whole, Japanese youth don’t want to serve.

“For the JMSDF, [Japan Maritime Self Defense Forces] I think it may be the most important issue,” said Capt. Toshiyuki Hirata, JMSDF deputy director of plans and programs.

When asked if he would join, Hideaki shakes his head politely.

“No, I would not,” he says, through questions and answers we run through Google translate.

It’s the same answer a few minutes later with another young Japanese male, one of the arcade employees. It happens again with a young male guitar store employee down the street, and his female sales assistant. They are military age, but they would not serve in Japan’s 220,000-person military.

“The majority of [young people] don’t even think about that,” the guitar store employee said.

Money isn’t really a deciding factor either, he said, although Japan’s military salaries are low, similar to U.S. blue collar wages, and unlike the U.S., military service does not lead to money for college in Japan.

The reasons Japanese youth choose not to enlist are cultural.

“We are so afraid of war. Anything that seems to be related to war,” the guitar store clerk said.

Even the video games at Taito Station are only fantasy-violent. Warrior princesses with big eyes throw potions; robots attack aliens. There is no soldier vs. soldier “Call of Duty.” The closest game the arcade has with Western or war-associated violence is a single booth of AMC’s “The Walking Dead.”

The Taito employee explains why: “There would be too many comments from Korea and Japan customers.”

But Japan needs its young people to change their minds. The Self Defense Forces are undergoing their biggest transformation since World War II. Each shift has largely been driven by China’s increased militarization, but potential threats from North Korea and Russia have prodded Japan as well. While neither China nor Japan signal that conflict is coming, there is a nervousness that Japan is not yet ready.

Maj. Gen. Yoshiki Adachi, Defense and Military Attaché at the Embassy of Japan said if he got a chance to convince Japan’s youth to serve, “I’d focus on the importance of serving the country,” he said. “Our security environment right now is very severe …. maybe you could say this environment is worse than that of the Cold War era.”

“But the problem is … if I talk about these kinds of issues at a high school, most of the students would not really be interested in them,” Adachi said.

Instead, recruiters emphasize the sexier parts of service, getting to drive a tank, or fly a jet. It doesn’t always work, especially for the Japan’s Maritime Self Defense Forces.

“Young sailors hate to stay at sea because it is difficult to connect,” Hirata said. “So it is very difficult to recruit young people.”

So JMSDF is considering adding wi-fi to its ships.

Japan is looking at other options too. Currently six percent of the Self Defense Forces are women; Japan is expanding roles for them, such as serving on submarines. In case numbers don’t improve, Hirata said the military is also thinking about what parts of its SDF could potentially be handled by drones, both above ground and underwater.

And it’s taking steps to slow its own personnel loss. In October it increased the age limit for recruiting from 26 to 32, and it is implementing two modest increases in how long officers must serve before retirement, extending their contracts by one year in 2020, and adding a second extension five years later.

Still, what the military really needs is a way to change the population’s mindset about military service. Prime Minister Shinzo Abe supports revising Article 9 of the country’s constitution to insert language that states ‘the Self Defense Forces are constitutional’ as one way it hopes to support service. The military got its biggest recent boost from its mobilization and response to Japan’s 2011 devastating earthquake and tsunami.

That tsunami response moved the numbers on general perception of the JSDF, the defense ministry said, citing internal polling that showed 90 percent of Japan’s population has a favorable view of the Self Defense Forces.

That number plummets to 24 percent, however, when asked if they would recommend military service to a child or friend.

For Hirata and Japan’s naval defenses, getting past that barrier will be critical to Japan’s future.

“We try to explain the importance of maritime security, because Japan is a maritime nation,” to potential recruits Hirata said. “The defense of Japan, especially at sea, is a very important thing.”