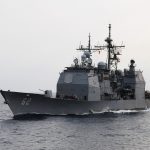 The USS Chancellorsville arrived at the American base in Yokosuka, Japan, on Thursday. The warship, described as one of the most capable guided-missile cruisers in the U.S. Navy, is armed with the latest Aegis combat system, and will be permanently deployed at the base, which is located at the entrance to Tokyo Bay.