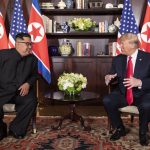 Polls conducted in Japan since the June 12 U.S.-North Korea summit reflect the Japanese public’s ambivalence towards the summit, skepticism about denuclearization on the Korean peninsula, and, despite pessimism about resolving the issues that stand in the way of improved Japan-North Korea relations, strong public support for Prime Minister Abe’s attempts to convene a summit with Kim Jong Un.