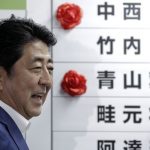 During his three-and-a-half years in office, Prime Minister Abe has often spent down his political capital on difficult initiatives that he believes are the right thing to do. Many of them have been important for the U.S.-Japan relationship, and there is no shortage of difficult immediate issues that will require expenditure of political capital for Japan and the United States.