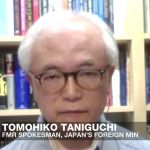 Okinawa protests, the U.S.-Japan alliance, and the strategic big picture

The horrific murder of an Okinawan woman by an American has stirred large-scale protests in opposition to the United States’ large military presence on the island, but the strategic value of the island “cannot be underestimated” when considering calls to remove American bases, Sasakawa USA’s distinguished non-resident fellow Tomohiko Taniguchi said while appearing on Al