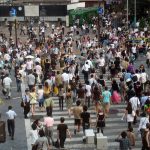 A slight rise in Japan’s birth rate in the past decade is no cause for celebration but instead reflects the “tempo effect” resulting from couples choosing to marry later in life, Sasakawa USA’s Director of Programs and Senior Fellow Daniel Bob said while introducing a seminar February 9 on the aging population in Japan. “That