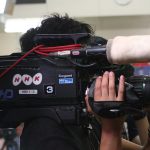 Internal Affairs and Communications Minister Takaichi Sanae caused a stir in February with a comment that broadcasters continuing to air politically biased programs may be shut down. Pressure from the Abe administration continues to mount, but the media has been hesitant to fight back.