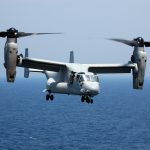 Despite an overall positive safety record, the Osprey has long been viewed on Okinawa as “the world’s most dangerous aircraft” — a reputation that has been exasperated by a recent crash on the island, Sasakawa USA’s Dr. Jeffrey Hornung said in a December 16 article in the Marine Times.