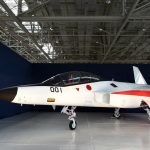 This Is Japan’s New Stealth Jet

When Japan unveiled its new X-2 stealth jet prototype Thursday, it was sending “a clear signal Tokyo wants to be taken seriously as a military-industrial power,” Sasakawa USA’s Jeffrey Hornung said in an article in Foreign Policy by Elias Groll. “This may be Japan saying, ‘We can do the technology, so consider us for international