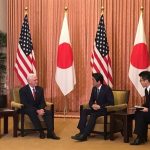 During his visit to Japan, Vice President Mike Pence raised the possibility of a bilateral trade agreement between the U.S. and Japan. But, reviving the Trans-Pacific Partnership trade pact may be the best option for Japan, says Sasakawa USA Fellow Tobias Harris, quoted in the Washington Post.