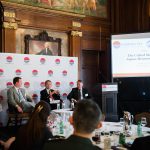 The United States and Japan: Reassessing 3-11

To commemorate the fifth anniversary of the “3-11” triple disaster now known as the Great East Japan Earthquake, Sasakawa USA in coordination with the U.S.-Japan Council hosted a discussion on the disaster and the joint response to it.