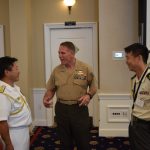 NHK features JUMP in report from Marine Corps Base Quantico

The U.S.-Japan military alliance and efforts to bring together those who have served in Japan were highlighted Saturday on NHK news after new crews attended an event hosted by the Defense Attaché office of the Embassy of Japan in the United States in collaboration with Sasakawa USA’s Japan-US Military Program (JUMP).