Japanese Prime Minister Shinzo Abe is likely to talk investments and jobs, but may not go so far as to commit to a bilateral trade negotiation while visiting President Donald Trump this weekend in Washington and Florida, Sasakawa USA’s Daniel Bob said in a news story by Politico. 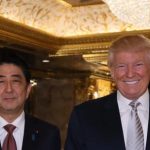