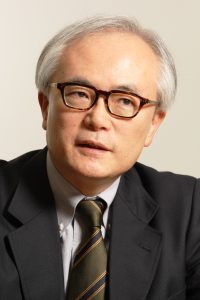 Between February 2013 and March 2014, Taniguchi was a Counselor in the Prime Minister’s Office. His responsibilities both then and now include writing foreign-policy speeches for Prime Minister Abe.

After spending twenty years with Nikkei Business, a weekly magazine, Taniguchi joined the Ministry of Foreign Affairs in 2005 as Deputy Press Secretary and Deputy Director General for Public Diplomacy. Until he left the ministry three years later, he addressed the English speaking press and wrote speeches for Foreign Minister Taro Aso and other national leaders.

While with the magazine, Taniguchi worked in London as a correspondent from 1997 to 2000. In 1999, the Foreign Press Association in London elected him President, the first from Asia. He spent sabbaticals at Princeton University as a Fulbright Visiting Fellow, at the Shanghai Institute for International Studies, and at the Brookings Institution as a CNAPS Fellow.

For five years until 2013, Taniguchi was Executive Adviser to Yoshiyuki Kasai, the then-Chairman of the Central Japan Railway Company, while holding visiting professorships at Keio SDM and Meiji University School of Global Japanese Studies.

Taniguchi holds an LL.B. from the University of Tokyo, has authored or co-authored more than 10 books on international affairs, and has appeared live more than 250 times on media outlets including BBC, Al-Jazeera English and CNN.

Brexit: The consequences for Japan

Brexit was a bolt out of the blue, one with strategic, economic, and political implications not just for countries across the Atlantic, but also for ones in the Asia-Pacific. This is particularly true in Japan, which in recent years has worked to build and enhance its relationship with London.