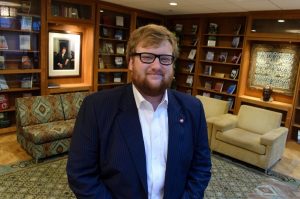 Benjie Canady joined Sasakawa USA in May 2020 and serves as an Associate Program Officer providing programmatic support for The Alliance Working in America (TAWA) program series, the Sasakawa USA Emerging Experts Delegation (SEED), the Congressional Staff Program on Asia (CSPA) in partnership with the East-West Center in Washington, and the Congressional Study Group on Japan (CSGJ) in partnership with the U.S. Association of Former Members of Congress.

Due to his father’s service in the U.S. Navy, Canady had the opportunity to live in Sasebo, Japan for three years which pushed him to develop his understanding of the U.S.-Japan relationship. Prior to joining Sasakawa USA, he interned at the Center for Strategic and International Studies Japan Chair, the U.S. Embassy in Tokyo, and the Office of Multilateral Nuclear and Security Affairs at the U.S. Department of State. Before moving to Washington, he spend a year as a Fulbright English Teaching Assistant (ETA) in Jeju, South Korea.