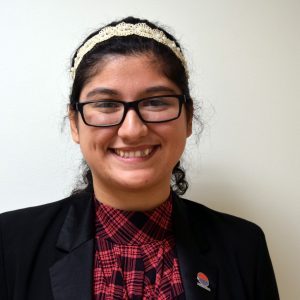 Ariqa Herrera joined Sasakawa USA as Executive Assistant to the Chairman and Administrative Assistant in September 2017. In 2020, she was promoted to Office Coordinator. Prior, she worked as the Office Manager of Uncle Julio’s Mexican restaurant overseeing the restaurant’s finances and hiring responsibilities. She was a Team Leader for D.C. Reads at American University, an organization that partners with D.C. public schools to tutor elementary students who are behind on their literacy skills. In her role as Team Leader, she recruited, trained, and oversaw a team of up to 15 tutors to an elementary school with a large English as a second language population.

While at American University, she helped create the inaugural Japanese Conversation Club. This club recruited Japanese exchange students and students studying Japanese to meet weekly to practice conversational Japanese and monthly for cultural exchange events. Herrera studied abroad at Ritsumeikan University in Kyoto in the Intensive Japanese Track. She graduated from American University with a BA in International Service and minors in Japanese and Economics. In fall of 2020, she will start studying at Johns Hopkins School of Advanced Studies with a concentration on International Economics and International Political Economy.