A look at press coverage from Alliance Commission report rollout 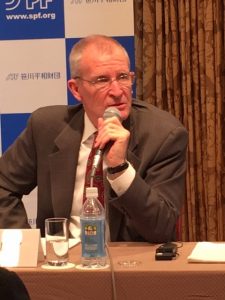 The U.S.-Japan Commission on the Future of the Alliance released its final report, “The U.S.-Japan Alliance to 2030: Power and Principle,” on February 29, 2016 at a press conference in Tokyo.

Sasakawa USA CEO and Chairman Admiral Dennis Blair said the report is unique because the Commission that wrote it is balanced — half American and half Japanese.

“Of the 35 recommendations it makes, over half are directed not at one government or the other, but at both,” Blair said. “The emphasis is on common strategy and common actions to meet the challenges of the future. The recommendations include specific proposals for relations with China, and a range of actions to deepen, broaden and sustain the alliance, making it more credible and effective. This report will set the standard for future strategy for the U.S.-Japan Alliance, the cornerstone of American security in East Asia.”

Noboru Yamaguchi, a retired lieutenant-general in the Ground Self-Defense Force and one of the authors of the report, was quoted in an article by Robin Harding in The Financial Times.

“The baseline of this report is China will be more powerful and a bit more aggressive,” he said .

Here’s a look at press coverage from the publication rollout:

Read the full report here or learn more about the Commission here. （日本語の報告書はこちらからダウンロードできます）