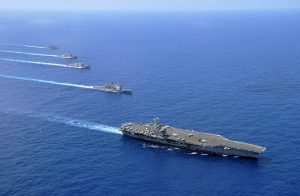 Although tensions have flared in recent weeks over American freedom of navigation operations in the South China Sea, one key point to take away is that the two countries continue to communicate, according to Dr. Jeffrey Hornung, a fellow with the Sasakawa Peace Foundation USA.

According to an article by Jane Perlez in the Nov. 3 edition of the New York Times, Adm. Harry B. Harris Jr., the head of the US Pacific Command, “said the Navy would continue to conduct freedom of navigation operations similar to one in the South China Sea last week that China criticized.”

The report states Harris arrived in China Monday “for a long-planned visit that is part of regular exchanges between senior American and Chinese military officials.”

Hornung, who has spent several years studying the maritime policies and actions of players in the Asia Pacific region, said this regular exchange between officials is a positive sign.

“China and the US are still communicating,” Hornung said. “This is important to highlight because some of the noise in the analysis and commentary tends to paint a picture of our countries heading toward some sort of low-level conflict. Neither country wants that, and the fact they maintain communication is important, particularly between our militaries.”