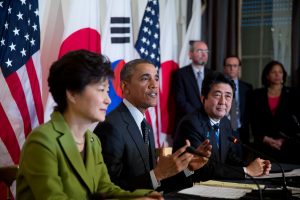 Japan and South Korea “have far more to gain when working in unison than when they are driven apart by differing interpretations of history,” Sasakawa USA’s Dr. Jeffrey Hornung said in a Kyodo News article about the two countries showing improved unity in addressing North Korea’s nuclear ambitions.

Last week, U.S. President Barack Obama joined Japanese Prime Minister Shinzo Abe and South Korean President Park Geun-hye on the sidelines of the Nuclear Security Summit to discuss a trilateral response to the nuclear threat, journalist Kakumi Kobayashi wrote in the article, which ran in publications including the Japan Times.

In recent years, relations between Japan and Korea have been strained by disagreement over the issue of “comfort women.” But the two countries have been striving to reach a resolution on the matter, and a potential nuclear threat from their neighbor provides more motivation to cement the agreement.

“America is coming together with its two Northeast Asian allies to publicly state their shared commitment to deal with North Korea,” Hornung said in the article.