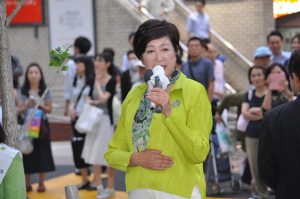 Bloomberg Politics coverage of the Sunday election suggests that recent scandals involving Prime Minister Abe and the LDP, along with Abe’s prioritization of constitutional revision, may have led to this election outcome. An article published following the election included insight from Sasakawa USA Fellow for Economy, Trade, and Business, Tobias Harris, who supported the claim that Abe’s hasty pursuit of constitutional revision may have influenced the electorate.

“Criticism over constitutional revision could be the thin end of the wedge for broader criticism of Abe’s leadership,” said Harris. “I wonder whether we’ll also see Abe backed into a Cabinet reshuffle that is sooner than he wanted and more extensive than he wanted.”

Harris also said that by rushing to revise the constitution to clarify the legitimacy of Japan’s Self Defense Forces, Abe “handed his critics a cudgel with which to attack his leadership.”

Click here to read the full article by Bloomberg Politics.