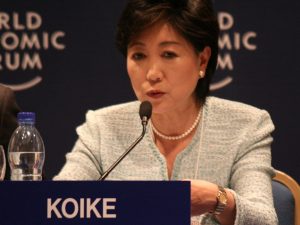 Yuriko Koike, Governor of Tokyo and leader of the newly formed ‘Party of Hope,’ will not contend for a position in the Japanese Diet elections on October 22, effectively leaving the new party without a strong contender for prime minister, and ending fears that Prime Minister Abe’s Liberal Democratic Party will compete against a strong opposition party during the race. Washington Post coverage of Koike’s decision included commentary from Sasakawa USA Fellow Tobias Harris, who weighed in on Koike’s motives for forming the Party of Hope and then deciding not to run for parliament.

According to Harris, due to Koike’s decision, the Party of Hope “appears to be less a nascent second major party and more a vehicle for a Koike vendetta against Abe.”

Harris was also quoted in a Japan Times article on the competition between Koike’s Party of Hope and Abe’s Liberal Democratic Party, which reported on diminished public interest in Koike’s party at the national level.

“The party’s manifesto is unlikely to inspire great passion among independents, without whom it will be impossible for (Party of) Hope to make significant gains at the LDP’s expense,” Mr. Harris told the Japan Times.

Click here to read more in “Popular Tokyo governor decides against running in Japanese election, a boon for Abe,” by Anna Fifield at the Washington Post, and click here to read “Yuriko Koike’s tactics fail to inspire hope as Lower House election kicks off, analysts say,” by Tomohiro Osaki at the Japan Times.