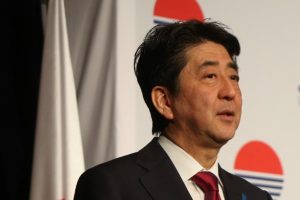 Tobias Harris, Sasakawa USA Fellow for Economy, Trade, and Business, was quoted in the Japan Times and the New York Times on the topic of recent scandals surrounding Japanese Prime Minister Shinzo Abe. He was also interviewed for the Bloomberg Daybreak Asia podcast. Abe’s administration is currently facing backlash over government cover-ups of documents relating to a public land deal with education organization Moritomo Gakuen, and alleged favoritism in a deal to establish veterinarian school Kake Gakuen in a special economic zone in Japan.

In the Japan Times article “Questions arise over Trump-Abe ties at critical juncture for Japanese prime minister” published on April 15, Abe’s good rapport with President Trump is called into question. Abe will seek diplomatic gains during his Florida summit with Trump on April 17-18 while facing a precarious political situation at home. Harris comments, “While the trip will help push some of the scandals out of the headlines for a few days, I think on the whole that the summit won’t do much to help Abe domestically.”

The April 16 New York Times article “As Scandal-Tarred Abe Meets Trump, ‘the Situation Is Getting Dangerous’” highlights Japan’s domestic political situation amidst new revelations of a government cover-up of documents relating to Moritomo Gakuen. Harris notes that “there’s still nothing to say that Abe ordered the cover-up,” but he points out that the public will not passively accept the government’s involvement in “falsifying” and “making up documents.” He warns that Abe “is running out of time, and there doesn’t really seem to be a way out” from his predicament.

Harris also provided commentary about Abe’s political situation on an April 17 Bloomberg Daybreak Asia podcast titled “Trade a Big Issue For Trump-Abe Meeting.” He points out that the resurfacing of the Kake Gakuen scandal has left Abe politically “not in good shape right now.” Harris also notes that despite the sharp decline in Abe’s approval ratings and the difficulties in making political headway during the summit with President Trump, he thinks that the Japanese public appreciates how Abe has handled working with Trump, considering Trump’s campaign rhetoric against Japan’s trade policies with the US.

Read “Questions arise over Trump-Abe ties at critical juncture for Japanese prime minister” in the Japan Times and “As Scandal-Tarred Abe Meets Trump, ‘the Situation Is Getting Dangerous’” in the New York Times. Listen to “Trade a Big Issue For Trump-Abe Meeting” on Bloomberg Daybreak Asia.