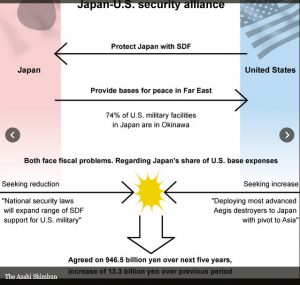 Sasakawa USA’s Masayuki Hironaka, a retired JASDF lieutenant general, explained in the article that the symposium was planned on the advice of Sasakawa USA Chairman and CEO Adm. Dennis Blair.

According to the Asahi Shimbun article by Naotaka Fujita, “Blair said Japan’s territorial dispute with China over the Senkaku Islands in the East China Sea has changed the dialogue between Japan and the United States into a two-way exchange instead of the one-way communication of the past. He also expressed expectations that Japan would more aggressively present its proposals about the future of the security alliance in light of the comments made by [Republican Presidential Candidate Donald] Trump.”

The article describes “Trump’s assertion that Tokyo isn’t pulling its weight in the Japan-U.S. security alliance… among other things, that he would support withdrawing U.S. troops from Japan unless Tokyo paid more for hosting U.S. bases.”

The forum in Tokyo served to inform the public about how Japan has contributed to the bilateral security alliance, based on comments from high-ranking former SDF officials. Sasakawa USA anticipates releasing a report detailing its findings in early 2017. Read more about the conference, “The U.S.-Japan Alliance and Roles of the Japan Self-Defense Force,” and its parent program here.

Read the Asahi and Sankei articles below: