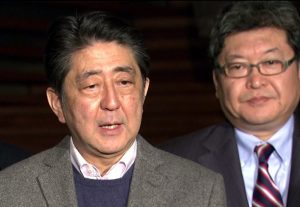 Sasakawa USA Fellow for Economy, Trade, and Business Tobias Harris was quoted in a Financial Times article this week on Japanese Prime Minister Shinzo Abe’s slipping approval rating. The July 10 article suggests that Abe’s poor approval rating (36 percent, according to Yomiuri, compared with a 52 percent disapproval rating) may lead the Prime Minister to retreat from an economic stimulus plan, or lead the Liberal Democratic Party to select a new leader.

According to Harris, “the Yomiuri poll suggests that the public’s trust in Abe — including LDP supporters — is collapsing.” Prime Minister Abe addressed his poor approval rating by promising a cabinet reshuffle in August, but this “already seems like too little, too late,” stated Harris.

While Abe hopes to serve as Prime Minister until the 2020 Olympic Games in Tokyo, he will need to win a party election in fall 2018 and a general election by December 2018 before that hope can become a reality. “I think it’s an increasingly open question whether Abe will even be in a position to run again in 2018,” said Harris.

Click here to read the full article in Financial Times.