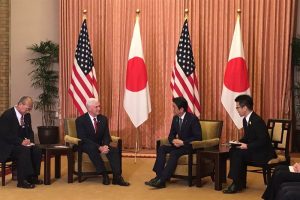 In his recent visit to Japan, Vice President Mike Pence suggested forming a balanced, bilateral free trade agreement with Japan, which could pressure Japan to loosen barriers on products such as agricultural goods and cars. His comments came at a time when Japanese officials seem to be re-embracing the Trans-Pacific Partnership (TPP), a Pacific Rim trade pact that U.S. President Trump withdrew from early in his presidency. An article published on April 18 in the Washington Post hones in on Japan’s return to TPP, and cites expert insights from Sasakawa USA Fellow Tobias Harris.

Despite Prime Minister Abe’s earlier remarks that TPP would be “meaningless” without the U.S., Japan’s Chief Cabinet Secretary Yoshihide Suga has floated the possibility of reviving the trade pact.

According to Harris, returning to TPP without the U.S. may be Japan’s best option. In addition to providing a better trade option than the China-led Regional Comprehensive Economic Partnership pact, Harris says that reviving TPP allows Japan to act as a regional leader and “gives Japan some leverage over the U.S. in their bilateral economic relationship, while also leaving the door open for the U.S. to join in the future.”