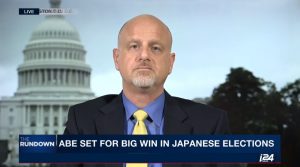 “The importance of [the election] is that this is going to set the stage for him for the next four years,” Bob said of the significance of the October 22. A strong performance by the Liberal Democratic Party could allow Shinzo Abe to become “the longest serving Prime Minister in Japanese history.”

When asked how tensions with North Korea affected the Japanese election, Bob responded that “Abe is seen as a strong voice in security. He’s made quite a number of changes in his time in office to upgrade Japan’s defensive capabilities.” Additionally, said Bob, Prime Minister Abe’s experience with North Korea may be viewed positively by the Japanese public, especially because of “North Korea’s advances in missile technology and nuclear technology.”