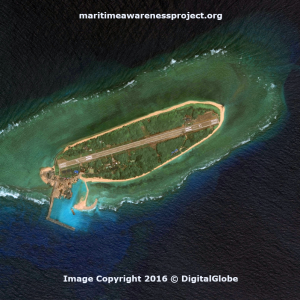 While it is still unknown how China will respond to a highly unfavorable international arbitration ruling on maritime disputes in the South China Sea, the United States should give China the space to “walk back off the diplomatic ledge they’ve put themselves on,” Sasakawa USA’s maritime experts Adm. Dennis Blair and Dr. Jeffrey Hornung said in news stories analyzing the decision.

Although China is unlikely to initiate military action in response to the ruling, it could declare an air identification zone, increase harassment of Philippine fishermen or take other provocative actions, Blair, chairman of Sasakawa USA, said in an article in USA Today.

“We should give China the space to walk back off the diplomatic ledge they’ve put themselves on, and not make it more difficult for them. (But) we should continue the robust military exercising we’ve always done in the South China Sea,” he said.

He continued in an article in the Financial Times: “I might be kidding myself, but behind the truculent rhetoric, I detect a desire on the Chinese side to ease off,” he said. “The U.S. should do nothing to stop this.”

In a Washington Post article, Blair said the Pentagon probably would continue freedom of navigation operations, but likely won’t escalate those activities further, at least for now.

“I don’t think this spirals into total war between China and the United States,” he said in the article. “I think [the Obama administration has] enough sense to give China the rhetorical and diplomatic space to back off the ledge that they’ve gotten onto.”

In an article in Foreign Policy, Blair called the ruling a “strong rebuke of China’s activities in the South China Sea over the last 15 years,” and said that Beijing’s next steps will be crucial.

“If China made a move on Scarborough Shoal, to actually bring in dredgers to build that up, I would think that would be a major crisis in the region,” Blair said.

Hornung, Sasakawa USA’s Fellow for Security and Foreign Affairs, said in an article with The Japan Times that some fear the decision could escalate China’s provocations.

“Most of the ‘worst case’ predictions envision Beijing becoming increasingly aggressive, focusing its ire in the South China Sea,” he said. “This includes ramping up the militarization of its artificial islands, setting up a South China Sea ADIZ (air defense identification zone) or conducting land reclamation activities on Scarborough Shoal,” an uninhabited shoal just 230 km (140 miles) from the Philippine coast that Beijing wrested from Manila’s control in 2012.

“Less considered, but just as plausible, is Beijing directing some of its anger toward Tokyo and ramping up activities in the East China Sea,” he added.

In a follow-up article in The Japan Times, Hornung explained how the ruling could affect Japan’s claims on Okinotorishima, an atoll south of the mainland that is controlled by Japan but also claimed by Taiwan.

“The case of Okinotorishima is related to China’s artificial islands in the South China Sea in the sense that Japan claims an EEZ from barely above-tide elevations,” Hornung said. “In the same way that Washington’s nonsignatory status of UNCLOS remains a blight on its credibility to take others to task for convention-related issues, Okinotorishima stands as the Achilles’ heel in Tokyo’s credibility to take a harder position against China in the South China Sea… It is simply too hard to ignore the hypocrisy: Japan criticizes China for claiming islands out of low-tide elevations or rocks while Tokyo itself is doing the same thing in Okinotorishima.”

Read full coverage in the articles below: