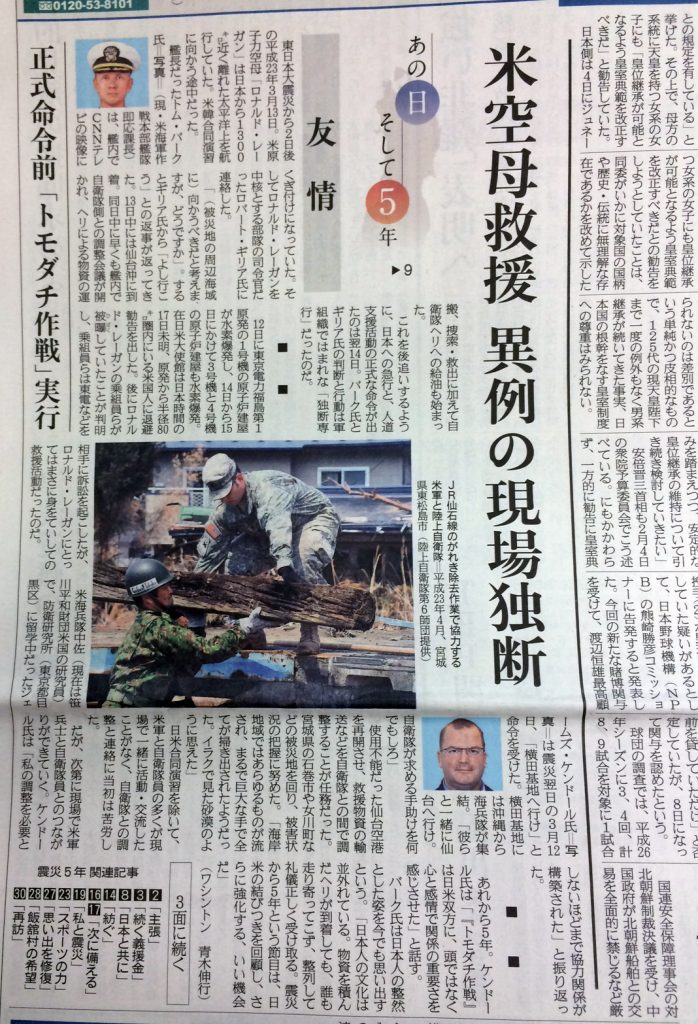 Sasakawa USA’s James Kendall’s experience working with Operation Tomodachi is detailed in a March 8 article series in the Sankei Shimbun.

Below is a translation of the two articles:

On March 13, 2011, two days after the Great East Japan Earthquake, the U.S. nuclear-powered carrier USS Ronald Reagan was sailing in the Pacific Ocean, 1,300 km (about 800 miles) from the coast of Japan. It was on its way to the U.S.-Korea joint exercise.

Capt. Thom Burke (current Director of Fleet Readiness, U.S. Navy) was aboard the Reagan, glued to CNN footage of the disaster. Soon after, he made a call to Rear Admiral Robert P. Girrier, who at the time commanded Carrier Strike Group 7, aboard the USS Reagan.

Burke recalls telling Girrier that the vessel should head toward the area impacted by the disaster. Girrier agreed. The vessel arrived off the coast of Sendai that same day, and the group held coordination meetings with the Japan Self-Defense Forces (JSDF). As a result, many operations were instantly initiated, including material transfer, search and rescue missions, and refueling operations.

On the following day—March 14, 2011—the official order was issued for humanitarian assistance within the affected area of Japan. But the decision Burke and Girrier had made to help was “at their own discretion,” which is rare in a military organization.

On March 12, 2011, the buildup of rising steam pressure at Fukushima Daiichi Nuclear Power Station’s Unit 1 caused an explosion within its reactor building. Between March 14 and 15, similar issues caused explosions at the reactor buildings for Units 3 and 4. On the early morning of March 17, the U.S. Embassy in Japan issued an evacuation order for Americans who were staying within an 80 km radius from the power plant. Rescue operations were truly an exhausting effort, and crew aboard the USS Ronald Reagan later learned they had been exposed to radiation, leading to a lawsuit by some Sailors against Tokyo Electric Power Company. 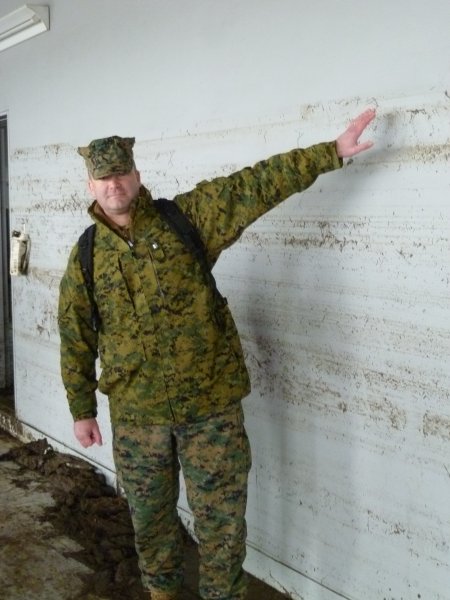 A lieutenant colonel in the U.S. Marine Corps at the time, James Kendall (currently the Fellow for Common Challenges at Sasakawa Peace Foundation USA), shows the high water mark at Sendai Airport.

A lieutenant colonel in the U.S. Marine Corps at the time, James Kendall (currently the Fellow for Common Challenges at Sasakawa Peace Foundation USA), who was studying abroad at the National Institute for Defense Studies (Meguro-ward, Tokyo), was issued an order on March 11 to go to Yokota Air Base the next day. Marine forces from Okinawa were deployed to Yokota, and Kendall was ordered to rush to Sendai with the Marines and help with whatever support the SDF needed.

One of the missions was to reopen Sendai Airport, which had been closed in the disaster, and to coordinate the transfer of relief materials with the Self-Defense Forces. They toured the affected areas, including Ishinomaki and Onagacho in Miyagi-prefecture, to better understand the extent of the damage. While visiting those locations, Kendall recalls one of the Marines saying, “[I]n the waterfront area, all the things were washed away as if they were scooped out by a massive giant’s hand. The view was similar to what I saw at the desert in Iraq.”

The U.S. Marines and the SDF at that time did not have experience in operations or integrated activities, except for U.S.-Japan joint exercises; therefore, it took time for both sides to effectively and efficiently communicate and coordinate. However, the bond between U.S. soldiers and SDF personnel steadily strengthened as they worked side-by-side on the ground.

“The coordination network between the U.S. Forces and the SDF was developed to the point where it did not require my help,” Kendall said.

Five years now have passed since the earthquake.

“Operation TOMODACHI taught both the U.S. and Japan the importance of forging relationships through the heart and through feelings, not only with one’s head,” Kendall said.

“The Japanese culture is exceptional,” he said. “Even when a helicopter with supplies arrived, they didn’t rush toward it. Rather, they would orderly get in a line and receive materials very politely. The 5-year milestone from 3.11 is a great opportunity to re-confirm the bond between the U.S. and Japan, and further strengthen it.”

The role of bilateral disaster training

Only 33 days after the Great East Japan Earthquake, Sendai Airport was restored to allow the takeoff and landing of civilian airplanes. Colonel Makoto Kasamatsu (currently working as Intelligence Manager of the SDF’s Western Army Headquarters), who was in charge of coordination with the U.S. forces as Director of the Bureau of International Defense in the SDF, shared his memories from that time.

Kasamatsu arrived at the Sendai airport on March 18, 2011, one week after the earthquake. Facing the soaked runway and grounds, he felt that the process of restoring the airport’s usual functions would take at least six months. However, during a meeting with delegates from U.S. forces, he felt strong enthusiasm from the U.S. side “to make Sendai Airport a symbol of reconstruction.”

Col. Kasamatsu vividly remembers one particular scene. When U.S. Marines were helping to clear away the cars and debris that had washed onto the airport, they started out by using heavy machinery that was efficient for such heavy work. Kasamatsu witnessed a captain stop the work, saying that “each car has its owner, so handle it carefully in the Japanese way.” Kasamatsu felt reassured from this experience, knowing that U.S. forces and the SDF would be able to collaborate more broadly and deeply in the case of future disasters.

Another location where Operation TOMODACHI crews provided relief assistance was in the gymnasium of a school that had been closed due to the earthquake. “It was an unusual scene,” said Major Kazuhiko Hashimoto, who was serving at the JGSDF 20th Infantry Regiment as the 6th Division Headquarter training leader. “Huge, powerful guys who are much taller than 180 cm were working with local high school students, awkwardly brushing away mud that had dried on the gymnasium floor.”

In addition to the removal of rubble and sludge in 12 schools, 60 members of U.S. forces also assisted with the restoration of stations on the JR Senseki line between Sendai and Ishinomaki in an effort coined “Operation Soul Train.” While the service members were good at heavy, physical work, such as carrying a 300 kg vending machine off of a platform with only three people, they seemed to have challenges with detailed, delicate work. However, Major Hashimoto felt each soldier’s sincere heart and strong will to contribute to the affected region.

Upon completion of Operation Soul Train, Major Hashimoto shook hands firmly with a U.S. commander on the site, and that commander, in turn, gave him a medal with the name of his troop. The commander told him, “We’ll be able to meet again if you keep this.”

“It was TOMODACHI that saved us, for sure,” Hashimoto said.

After the earthquake, the TOMODACHI operation eventually evolved into extensive disaster training attended by many foreign forces, including Americans.

In November 2014—3 years and 8 months after the earthquake—the JGSDF Northeastern Army conducted disaster training called “Michinoku Alert 2014,” in which 15,000 people, including U.S. forces in Japan and local governments in the Northeastern part of Japan, worked to development the capacity to deal with an earthquake scenario. This was the first joint training among U.S., Japan, and Australia held in the country.

When the very first Michinoku Alert was conducted in 2008, before the Great Earthquake, there were only domestic participants —Miyagi and Iwate prefectures as well as 22 local governments and 18 institutions. However, after the earthquake, an increasing number of people came to recognize the importance of reinforcing Japan’s partnerships with foreign forces, such as U.S. forces in Japan, so they can work together more effectively during emergencies.

One of the JGSDF members mentioned that “the bond tightened through the experience of the earthquake would certainly play an important role in the case of an emergency in the future.” The spirit of Operation TOMODACHI is still alive among the SDF and U.S. forces. 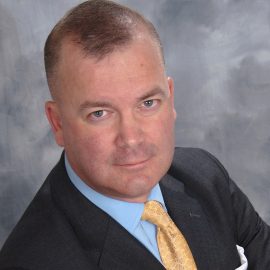 James Kendall was the Fellow for Common Challenges and Director of the Japan-US-Military Program (JUMP) at Sasakawa USA, specializing in topics including Asia-Pacific affairs; U.S. and Japanese foreign and defense policies; maritime security; U.S. basing in the Pacific; and U.S.-Japan cybersecurity policy.