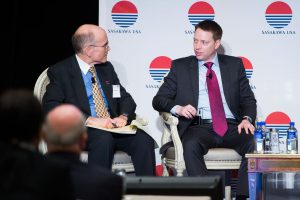 On May 2, Sasakawa USA held its Fourth Annual Security Forum, featuring government officials, think tank experts, and private sector specialists speaking on topics of relevance to security in the context of the U.S.-Japan alliance.

The event heavily focused on the most pressing Asian security issues, such as North Korea’s continued nuclear weapons program and the threat posed to Japan and South Korea, the Trump administration’s policy in the region, and the strengths and areas of potential development in the U.S.-Japan relationship.

Speaking on the topic of Asia policy under the Trump and Abe administrations, Matthew Pottinger, Senior Director for Asian Affairs in the National Security Council, estimated that North Korean officials want to use nuclear weapons for their coercive capabilities. “They want to use these weapons as an instrument of blackmail to achieve other goals,” said Pottinger, quoted by the Associated Press. The full article is listed in the links below.

In addition, participants commented on prospects for a bilateral trade agreement between the U.S. and Japan, which Ambassador Sasae said Japan is not ready for. “We can’t simply go for a bilateral with the United States; we need to take care of other countries in the region,” said Sasae, quoted in a World Trade Online article.

A full list of media coverage, including segments using clips of the event, is below: