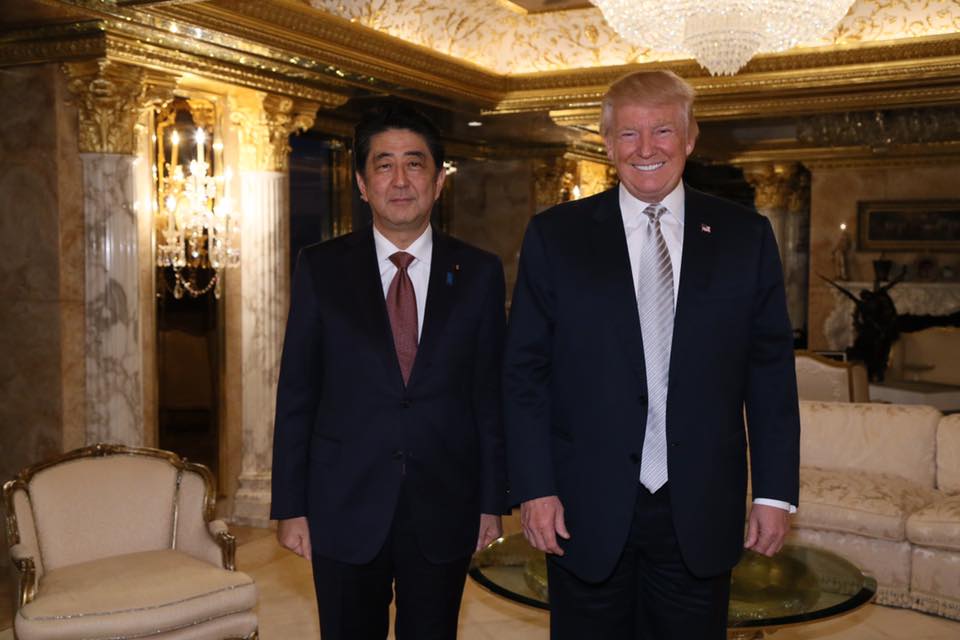 Adm. Dennis Blair, Chairman and CEO of Sasakawa USA, agreed in a Foreign Policy article that Abe’s aim would be to establish himself as a friend, not a foe, to the Trump administration.

“It’s a good thing for the two of them to get together and just have that channel of communication open,” Blair said in the article.

Speaking at a discussion on U.S.-Japanese ties at the Wilson Center and quoted in an article in the Washington Times, Sasakawa USA Fellow for Security and Foreign Affairs Dr. Jeffrey Hornung said Trump’s campaign remarks may not have a lasting impact on the U.S.-Japan relationship, and that the decisions of President Trump may not echo what he put forward as a candidate.

“The rhetoric of the campaign does not pertain to the people who work on the alliance every day,” Hornung said in the article.

Although the two leaders appear to be moving past previous rhetoric, Blair noted if the Trump administration does follow through with its “America First” promises, that could bolster Japan’s leadership role in Asia. “If the United States simply withdraws from the field, that leaves Japan on its own as the biggest country committed to basic free trade and strengthening the WTO. And that leaves the field to the Chinese if that doesn’t happen,” Blair told FP. “That would be an interesting read if the UK, Japan and Germany became the leaders of the free trading bloc while the United States sorted itself out for the next several years. It might have the effect of pushing that mantle onto others and we are sort of left behind.”

Prior to the meeting, Sasakawa USA distinguished non-residential fellow Tomohiko Taniguchi, who also serves as a special advisor to the Abe cabinet, echoed those sentiments, telling news sources the Japanese government was not focusing on campaign-season rhetoric, but instead on building a positive future between the U.S. and Japan. Taniguchi said the meeting was a chance for the two leaders to get to know each other and begin a preliminary exchange of views on a range of topics.

“I can tell you Prime Minister Abe has been very much thrilled and excited to see President-elect Trump because he is looking at the long-term calendar,” Taniguchi said in one of many media appearances, this one on CNN. “In two, three, four years even, Prime Minister Abe will have to work with President of the United States Donald Trump, and I think this is going to be a very good opportunity for both these leaders to get to know each other well.”

Taniguchi said no concrete decisions or “bullet points” were expected to come out of the meeting, as Abe did not plan to discuss any specific policy matters. View the full CNN interview below.