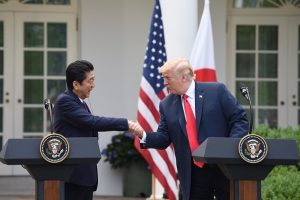 Tobias Harris, Fellow for Economy, Trade, and Business at Sasakawa USA, has published an article in The Diplomat examining various aspects of the Abe-Trump relationship. Harris sees Abe’s public rhetoric—more specifically, the topics that he chooses to avoid—as revelatory of the conflicting interests that the Prime Minister must weigh to both defend Japan’s interests abroad and maintain his popularity at home.

Published on June 8, “Between North Korea and Trade: Shinzo Abe’s G7 2018 Dilemma,” considers Abe’s displays of friendship with President Donald Trump as evidence that “Abe is eager to show the Japanese people that his relationship with the U.S. president makes him irreplaceable as Japan’s leader.” Abe has had to maintain a good public perception of the U.S.-Japan relationship to avoid confrontation and risk damaging the alliance. The article concludes with commentary on how these tensions will come to the forefront at the G7 summit in Canada where “Tokyo undoubtedly shares European and Canadian concerns about the Trump administration’s protectionist measures.”

Read  “Between North Korea and Trade: Shinzo Abe’s G7 2018 Dilemma,” in the Diplomat.