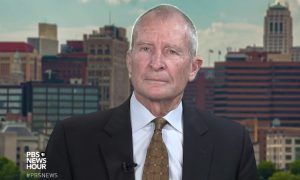 Sasakawa USA Chairman Admiral Dennis Blair appeared on the PBS NewsHour program on August 11 to discuss the latest provocations from North Korea and options for the U.S. government. In the segment, host Judy Woodruff asked Admiral Blair and former CIA analyst Sue Mi Terry about whether or not the North Korea threat has evolved and if conflict is likely to occur. According to Admiral Blair, the threats from North Korea are “nothing new.”

“The military facts are it’s very limited in what it can do,” said Blair, explaining that North Korea is still militarily behind the U.S. and its allies.

When asked about the prospects for conflict, Admiral Blair replied, “I think the prospects for conflict are really very low. The facts are known by both the United States and [North Korea] are if [North Korea] starts a conventional military conflict, they lose and the dictator loses his life. If they were to use a nuclear weapon against South Korea or Japan, much less the United States, we would retaliate with nuclear weapons. They might have 15 or 20, we have 2,000, and this is not a suicidal regime.”

At the end of the segment, Admiral Blair suggests that an “intensification of the current set of measures,” including new sanctions and economic pressure, may be the best U.S. government response to North Korea.

Click here to watch the full interview on PBS NewsHour.