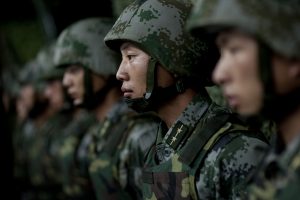 Pessimism in response to the rise of China is bad for the Navy and for U.S. interests in the Asia-Pacific, said Admiral Dennis Blair, Chairman of Sasakawa USA, to an audience of military and defense contractors on April 4. In his talk, Adm. Blair reminded the audience that China has not yet developed the capabilities necessary to undermine U.S. interests in East Asia, and instead of worrying about China’s growing military capacity the U.S. Navy should take the steps necessary to address the threat of China’s rise.

“Figure out how to defeat the [People’s Liberation Army] threat to the maritime operating in the Pacific and let everyone know — the chattering classes in Washington, the Chinese themselves — that if they tangle with the U.S. Navy, they’ll lose,” said Adm. Blair as quoted in Defense News.

“If the U.S. Navy does not develop new concepts of operations, new ways of operating, new capabilities, China might be able to attain those goals. And if they were to do that, the damage to our interests would be grave, the consequences to the region and the impact to the globe would be enormous.”

Read more on Adm. Blair’s comments and general coverage of the Navy League’s Sea-Air-Space Exposition in the following publications:

• DefenseNews: Former PACOM commander: Can it with the China pessimism
• SEAPOWER: Panelists Press for Strong Alliances in Pacific Region
• Washington Examiner: Retired admiral: China’s not driving the US out of the Western Pacific