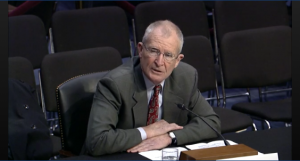 Sasakawa USA Chairman Adm. Dennis Blair warned that a U.S. pre-emptive “bloody nose” strike on North Korea would be “high risk and unpredictable,” in a recent interview with The Guardian. “Former US Military Commander Warns Against ‘Bloody Nose’ Strike on North Korea,” was published on February 20. Blair is a former Director of National Intelligence and previously served as Commander in Chief of the U.S. Pacific Command.

Citing the presence of tunnels and “difficulties of intelligence” in North Korea, Blair said in the article that a strike would be unlikely to destroy all the country’s nuclear capabilities, while also causing the regime to feel more aggrieved. He recommended that “any U.S.-led action should be seen as a response to a North Korean provocation to avoid any misunderstanding.” Instead of “treating unpredictability as a virtue in dealing with North Korea,” he advised that the U.S. needs “to be consistent and powerful and persistent.”

Blair advocates for the greater use of information campaigns in North Korea to undermine the regime’s propaganda efforts, calling it the “most potent weapon” the United States has against the country.

Read “Former US Military Commander Warns Against ‘Bloody Nose’ Strike on North Korea” in The Guardian.