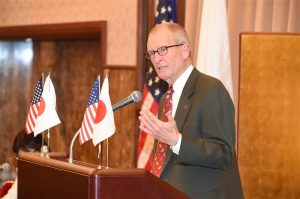 Asahi Shimbun recently provided Japanese-language coverage of Sasakawa USA Chairman Adm. Dennis Blair‘s comments in his Chairman’s Message, published in May. An article published on the newspaper’s website highlighted Adm. Blair’s thoughts on the need for a revision to Japan’s constitution, and the development of Japan’s Self Defense Forces (JSDF) despite article 9 of the post-war Japanese constitution, which limits the expansion of Japan’s military.

The article also outlined the two steps that Adm. Blair suggested are important for Japan to take in order to revise the constitution without stoking fears that it is reviving militarism. The first is to “clarify the country’s civil-military relations,” and the second is to reassess the roles of the three services within the JSDF. Finally, Adm. Blair emphasized the important role that the JSDF should play in collective self defense, a role that necessitates changes beyond constitutional revision.