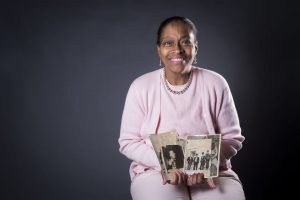 Judith Brown holds WWII photos from Japan that her father found in 1998. Sasakawa USA assisted with translating and providing historical context for the photos. Photo courtesy The News & Advance.

When undertaking a story about a mysterious cache of Japanese World War II-era photos, The News & Advance newspaper in Lynchburg, Virginia turned to Sasakawa USA for assistance with translating handwritten notes on the back of each image and providing background historical context.

The WWII photos, found in 1998 in an old shoe factory in Lynchburg, were a mystery to the family who found them, according to the article by Eleanor Roy published November 22.

Sasakawa USA’s Dr. Jeffrey Hornung, who provided expertise for the article, believes the photos were taken between 1937 and 1942 in China while the country was occupied by Japan. The images include rare looks at everything from soldiers marching to battle to high-level officials toasting to celebrate wartime treaties. Another shows people bowing before Emperor Showa.

“You see these different views of wartime Japan that really is amazing,” Hornung said in the article.

To read the full article, click here or view the photo gallery here.