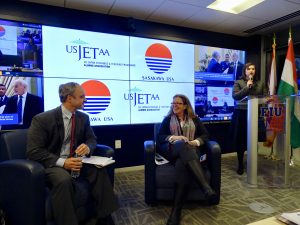 In Washington, D.C. more than 30 participants from the JET alumni, Sasakawa USA, and FIU in D.C. communities attended in-person. An additional 20 JET alumni and FIU students participated from New York, California, Arizona, and Florida, via live-stream. The JET Alumni Association of New York also held a watch party in downtown Manhattan for their members. View the recording of the event here. 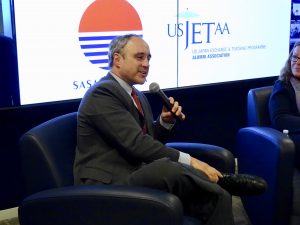 To give context for the upcoming discussion, Gannon laid out the ten types of people-to-people exchange between societies: diplomatic, commercial and business, professional, legislative, intellectual, student, grassroots, cultural and art, tourism, and family ties. He explained that these exchanges “form a web” tying two countries together and facilitating cooperation and goodwill. These “web relations” also act as a shock absorber, enabling countries to recover and bounce back from momentary dips in relations.

Gannon delved into the history of people-to-people exchanges within U.S.-Japan relations, citing four waves of exchanges beginning with the arrival of western missionaries in Japan. The second wave came from the shared wartime and Occupation experience in the early and mid-20th century, followed by American interest in Japanese culture and Zen Buddhism in the 1960s and 70s. The fourth wave continues today, spearheaded by the JET Programme and other cultural exchange programs.

Although the impact of people-to-people exchange can be hard to gauge, Gannon referred to a 1993 Gallup poll that found only 43% of Americans had favorable feelings toward Japan, reflecting the trade disputes that strained the relationship during that time. However, human connections and exchange have given a resilience to the U.S.-Japanese relationship, as seen when the 2018 Gallup poll noted the number of Americans who felt friendly towards Japan had doubled to 87%.

Lastly, Gannon raised the significance of the large amount of American donations and aid towards Japan after the 2011 Tohoku earthquake and tsunami. The 3/11 disaster ranks as the fifth most generous disaster giving in U.S. history, following only after the domestic disasters Hurricane Katrina and the 9/11 attacks, and relief for developing countries like the 2004 Indian Ocean tsunami and the 2010 Haiti earthquake. He believes that the outpouring of aid can largely be attributed to these people-to-people exchanges between Japan and the United States. 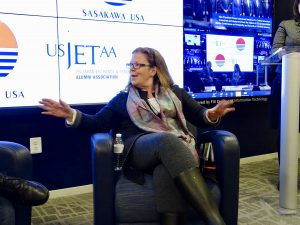 Dr. Smith turned the discussion to three initiatives within the Conference on Cultural and Educational Interchange (CULCON), a bi-national advisory panel to both U.S. and Japan governments that serves to strengthen cultural and educational ties between the two countries: TeamUp, a bi-national initiative aimed to increase student mobility, exchange, and learning; Nichibei Connect,  a “one-stop shop” resource database for the next generation of U.S.-Japan leaders to search career trajectories and educational opportunities; and Apolitical, or “Rural Resilience,” which encourages bilateral exchange concerning emerging areas of collaboration including energy, space, cybersecurity, etc.

The panelists also referred to their shared mentor, Tadashi Yamamoto, the founder of the Japan Center for International Exchange. Gannon stated that Yamamoto was a “missionary in the sense of people-to-people exchange.” Yamamoto encouraged exchange that was substantive, regular, and independent from government and corporate influence.

During the Q&A, panelists answered questions from JET alumni, FIU students, and the U.S.-Japan community attending in person and those tuning in virtually from across the country.

An FIU student asked the panelists what methods are used to preserve the history and authenticity of traditional Japanese cities. Dr. Smith replied that cities are simultaneously attempting to build upon the history and culture of the area and rebrand themselves to become more accessible to younger generations and foreign tourists. For example, Japanese tourism has promoted authentic Zen Buddhism and health consciousness that has become popular in western society.

Sasakawa USA is proud to partner with USJETAA to support the continued cultivation of U.S.-Japan relations and engage the alumni of the JET Programme and those with the same enthusiasm for Japan. Thanks also to Florida International University (FIU) for their support in hosting at their D.C. location.