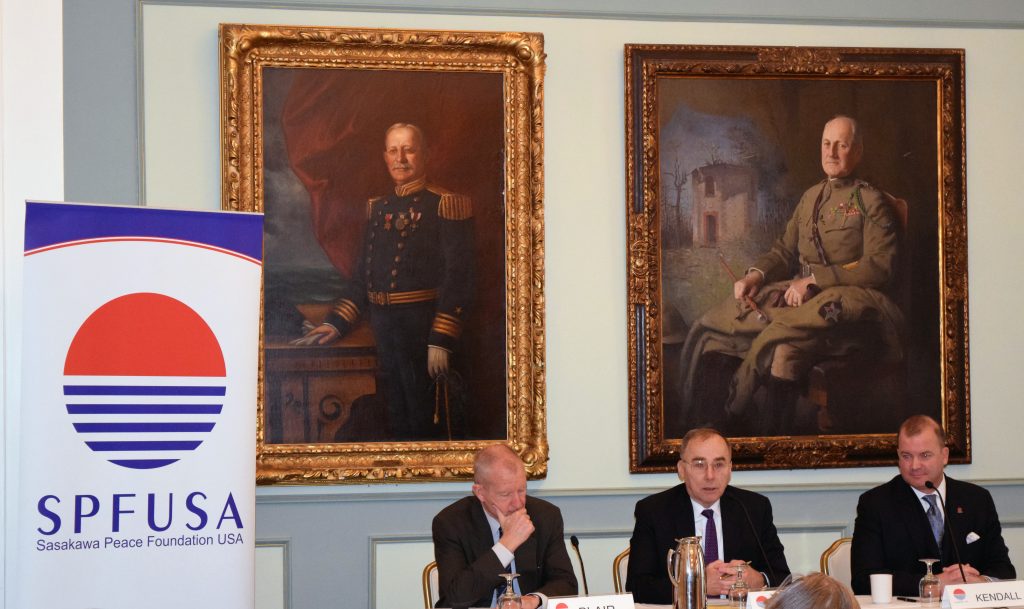 About 50 people gathered to attend a breakfast event last Thursday morning to introduce and talk in-depth on U.S. Bases in Japan, the subject of a new report authored by Sasakawa USA CEO and Chairman Admiral Dennis Blair and Fellow Lt. Col. James Kendall. Lt. Gen. Wallace “Chip” Gregson, who authored an introduction to the report, moderated the discussion.

The report presents four key findings on how the U.S. should proceed with the relocation of American forces in Okinawa. At the Thursday event, presenters summarized the key issues detailed within the report before moving to roughly hour-long question-and-answer session with the audience.

“If Okinawa is important to Japan, it automatically is important to the United States,” Wallace said in introductory remarks. “As allies with Japan, we have some obligation to make sure things turn out right.”

Blair answered the question of why the report is coming out now, after a plan of action already was decided in 2012. While he characterized 2015 as “one of the very best years in the United States-Japan alliance in decades,” he said the overall relationship is one that needs to be protected and preserved from the dangers of fallout related to an unsatisfactory situation in Okinawa.

To do that, he and Kendall said, the 2012 plan must be accelerated to complete the transfer from the current date of 2031 to no later than 2025. Also importantly, they said more thought needs to be given to showing the people of Okinawa the benefits of the plan, such as land returns that find new uses for existing facilities. The shared use of facilities also should be deepened, which would both increase cooperation between American and Japanese forces and also improve civil-military relations.

Other areas the panelists spoke on included:

• Information on some of the alternative plans put forth for American forces in Okinawa before the 2012 plan was adopted, and why none of them were considered feasible.
• The current status of facilities being constructed in Guam, and the reason those efforts already have been delayed by three to five years.
• A look at some of the opposition to the current plan and why, despite those concerns, it was supported both by the ruling party in Japan as well as the dominant opposition party.
• The strategic importance of Okinawa to all of East Asia in a climate of increasing tensions with China and North Korea, and why those concerns put a premium on the U.S.-Japan alliance.