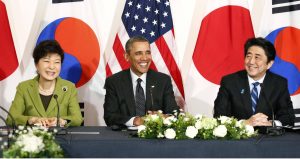 The United States and Japan reaffirmed the strength of their bilateral relationship at two high-level summits in Asia in late November: The Asia-Pacific Economic Cooperation (APEC) summit and the East Asia Summit (EAS).

On Wednesday, December 2, the House Subcommittee on Asia and the Pacific held a hearing assessing U.S. strategic interests related to those summits, both of which were attended by President Barack Obama.

According to Daniel Bob, Director of Programs and Senior Fellow with Sasakawa USA, the summits provided a forum for the U.S. and Japan to reaffirm the strength of their relationship across a range of economic, diplomatic and security issues.

“Indeed, the relationship is as strong as it’s ever been in the 70 years since the end of WWII,” Bob said. “The two countries were able to highlight the importance of the Trans-Pacific Partnership, the world’s largest trade deal ever, which is anchored by its two largest member economies – Japan and the United States. Washington and Tokyo also reaffirmed their commitment to fostering the rule of law and supporting international norms in such areas as freedom of navigation and maritime law. And both sides reinforced the importance of Japan’s new ability to contribute to regional and global security with the recent passage of legislation permitting Japan to engage in collective self-defense.”

Over the course of many days spent together in Turkey, the Philippines and Malaysia, Obama and Japanese Prime Minister Shinzo Abe also had time together to deepen their growing friendship.

[perfectpullquote align=”left” cite=”President Barack Obama” link=”” color=”” class=”” size=””]“On every issue that is of great importance to the United States of America, we’ve got a great partner in Japan, and we very much appreciate it.”[/perfectpullquote]

“Well, it is good once again to be with my friend, Prime Minister Abe, and the Japanese delegation,” Obama said before a bilateral meeting on November 19.  “We have been able to forge, I think, an excellent relationship on a whole host of issues and this gives us an opportunity to continue to discuss both our security cooperation and our economic cooperation.”

“On every issue that is of great importance to the United States of America, we’ve got a great partner in Japan, and we very much appreciate it.”

In published remarks prior to the hearing, Matt Salmon, Chairman of the Subcommittee on Asia and the Pacific, said Obama’s participation in the summits “is a heartening reinforcement of our commitment to the Asia-Pacific.”

“Critical issues of serious concern to our Subcommittee have been raised at both events, including the Trans-Pacific Partnership, South China Sea disputes, non-traditional security threats, and the expansion of multilateral economic and security cooperation. This hearing will give Members an opportunity to engage with the Administration about the outcomes of both summits, lingering challenges, and U.S. strategic objectives in Asia moving forward.”