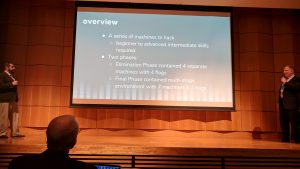 On November 29, Bud Roth, Non-Resident Fellow for Cybersecurity at Sasakawa USA, and Craig Stevenson, CEO of HyperQube, announced the winners of the Capture-the-Flag contest sponsored by Sasakawa USA for students of schools affiliated with Keio University’s International Cyber Security Center of Excellence. On stage at INCS-CoE’s Seventh Biannual Cyber Security Conference, Roth and Stevenson ran through the competition and how its participants fared.

The thirteen finalists were given five days to exploit seven machines in a segmented network environment. All thirteen compromised at least a few machines, but only two hacked into all seven and one hacked into six of the seven.  Based on this outcome, Roth and Stevenson announced the following winners:

Schools with most points

In addition, three students were able to find vulnerabilities in the game platform itself and disclosed these to HyperQube, which graciously hosted the games. HyperQube awarded the following three students a $50 gift certificate and an Ethical Disclosure Award:

The event was a lot of fun and a learning experience for everyone, Roth said. At the event’s end, he noted, “The goal here was to attract talented students to cybersecurity and help them build an international network of future colleagues. Cyber crime is a cross-border problem and today we contributed in a small way towards a cross-border solution.”

INCS-CoE was established in November 2016 by Keio University and collaborating members from American, British, and other Japanese universities to address cyberthreats through international collaborations.