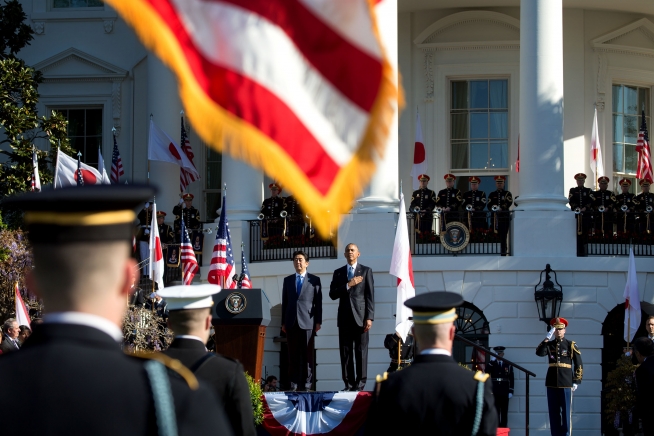 “It sends a symbolic message to, not only the incoming president-elect, but also to the region, that the U.S.-Japan alliance is stronger than ever, that we are able to confront past problems between us and still be stronger as allies,” said Dr. Jeffrey Hornung, fellow for security and foreign affairs, in a Voice of America article. “And of course a lot of the younger generation don’t know the significance of Pearl Harbor, but given that these two countries were bitter rivals and enemies just two or three generations ago, it’s amazing that they have been able to come this far and reconcile their past histories.”

In a CBS News broadcast, CEO and Chairman Adm. Dennis Blair echoed those remarks, stating the visit is evidence that history will not be forgotten, but that both nations have been able to rise above their past conflict and build up, decade after decade, the strongest of alliances.

Tobias Harris, Fellow for Economy, Trade, and Business, and Tomohiko Taniguchi, distinguished non-resident fellow, also weighed in on the significance of the visit.

“Japan is running as a front-runner in the arena of globalisation and internationalisation,” said Taniguchi, who also serves as an adviser to the Prime Minister, in an article in the South China Morning Post. “Abe feels responsible in standing tall and staying firm in advocating the value of a liberal international trading regime and rules-based order.”

In a Bloomberg News article, Harris said Japan is still seeking clarity on where the U.S.-Japan relationship will head under the incoming Donald Trump administration.

“At least in the first half of 2017, foreign policy is going to be the priority,” he said. “Step one is figuring out just where exactly the U.S.-Japan relationship is.”

Click here for a video and full transcript of Abe and Obama’s remarks, or view more related articles below: