A letter of thanks from Futoshi Toba, Mayor of Rikuzentakata

Futoshi Toba, the mayor of the hard-hit city of Rikuzentakata in Iwate Prefecture, wrote a letter of thanks to the U.S.-Japan Council and Sasakawa USA for hosting The United States and Japan: Reassessing 3-11 and continuing to support Japan as the country rebuilds. Though Mr. Toba was unable to attend the event, Ms. Amya L. Miller, Special Advisor of Rikuzentakata, served as a panelist on his behalf, and also read his remarks in the letter. Read his remarks below: 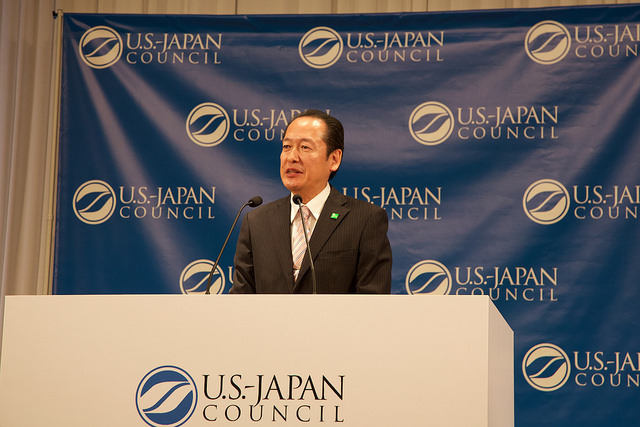 Dear Ms. Hirano, the president of the U.S.-Japan Council, executive directors, and ladies and gentlemen, good morning. I am the mayor of Rikuzentakata in Iwate Prefecture, Futoshi Toba. Let me apologize for not being able to attend the event today. Ms. Amya L. Miller, Special Advisor of Rikuzentakata, will read my speech on my behalf to report you the current situation of the city and thank you for your tremendous support.

Though five years have passed since that disaster, the local governments affected by it still are working towards rebuilding. Rikuzentakata is a small city that many of you wouldn’t know unless it was damaged by the disaster. About 24,000 people lived in the city before the earthquake, and 1,800 people lost their precious lives because of the disaster. The center district of the city was completely destroyed. How were we to live on, and how could we rebuild the city? I had become a mayor just four weeks before the quake, and I was totally at a loss and didn’t know what to do. I was driven to despair for the first time in my life. Surviving itself felt so hard, and this feeling was shared with all the citizens.

On March 11, 2011, the Great East Japan Earthquake changed all citizens’ lives profoundly. I am also one of them who was forced to change. I lost my beloved wife and house, was left behind with my 10- and 12-year-old sons, and had continued to ask myself how to both fulfill my fatherly duties and to encourage the disaster-stricken citizens.

My sons are now 15 and 17 years old, and they are both doing fine. I haven’t faced the difficulties of their rebellious stage; they are just good boys who love basketball. My small requests as a father are only to wish my second son would study a bit harder, and to wish they would eat more vegetables. They put up with the loneliness when I am away for business, but the three of us spend every day full of fun and laughter.

What I have felt after becoming a single dad is similar to the emotions I felt when I studied in the U.S. about 30 years ago. After the disaster, the devastated city streets were all covered with the rubble — we had to start rebuilding from a less-than-zero situation. “Rikuzentakata for anybody!” This was my determination to rebuild the city. The city should become a place where the socially vulnerable also would be able to live vibrant lives. The unmarried, young nuclear families, the aged, single moms, single dads, pregnant females, foreigners, the disabled and LGBT people — anybody should be warmly welcomed in my city. Therefore, I wished to develop the institutional framework and facilities of the city.

When I studied in the U.S., I was deeply moved by the scenes I saw, such as when a person in a wheelchair came out for a meal with friends; a one-armed person enjoyed a game of golf; an elderly couple happily took a walk together wearing matching clothes. To rebuild the affected areas, the goal is not only to develop the infrastructure, but also to create an inviting environment where the people can feel content. This is not an easy task, but it’s my big ambition.

I hope you would visit Rikuzentakata in a few years ahead when the reconstruction projects will be finalized, and then recognize — “this is what the mayor told us at that time.”

It is all thanks to your warm support that we can show you that Rikuzentakata, which was once totally devastated, now advances toward reconstruction.

As a mayor of Rikuzentakata, I pledge to continue making a concerted effort with our citizens to reconstruct and establish the pleasant city in which to live.

Also, I will work so hard to develop the city by solving each challenge so that my deceased wife would give me the praise — “you did great job” — and I will gain respect as a father. I sincerely hope that you will continue to give us compassionate support and cooperation.

We will be very pleased if you will visit Rikuzentakata, even though it is an inconveniently located city in Tohoku. We will continue to deliver information about the city’s recovery. It is my dream to rebuild the city as the place we can be proud of, and walk together on a new road with the people who have supported us.

In closing, once again I would like to show my deep appreciation for your support and hope to continue to receive the same warm encouragement in the future.