Author’s note from Shun Wetlesen, a freshman studying at Pacific University: “I am half-Japanese and half-American which has resulted in my strong interest in U.S-Japan relations. This summer I was selected to participate in the Global Classmates Summit, held in Washington, D.C. from July 26 to August 4.” 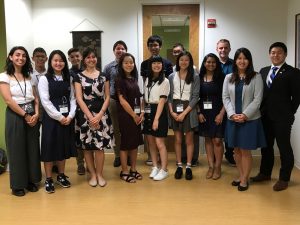 Students participating in the Kizuna Across Culture’s Global Classmates Summit visited Sasakawa USA in July 2018. Shun Wetlesen is third from left, in the back row.

The Global Classmates Summit is a ten-day gathering in Washington, D.C. where students have the opportunity to learn more about U.S.-Japan relations directly from government officials and scholars. Twelve students, six from Japan and six from the United States, are selected every year from schools participating in Kizuna Across Cultures’ Global Classmates program. The program seeks to connect American and Japanese students through an online cultural exchange. As a participant, I experienced first-hand how talking with students from Japan inspired me to continue my study of not only the language but the culture as well.

During the summit, the participants met with various government officials, academics, and think tank experts whose mission is to bring Japan and the United States closer together. Each evening, we would come together to go over key issues we had learned about during the day. Inspired by our meeting at Sasakawa USA where my fellow American participants and I learned about the significance of Article 9 in the Japanese Constitution, we spent one evening discussing Japanese pacifism and U.S. gun culture. We were able to discover that, despite their opposing nature, the two cultures shared many similarities.

Through our discussion, we found that the Japanese and American students had trouble understanding the other side’s perspective. For the American students, a commitment to pacifism seemed like a sign of weakness. Americans had always been taught that the world is not fair: we as a people had fought against the British in order to obtain the freedom that we now enjoy. As such, the word “fighting,” in America has become synonymous with perseverance and carries a positive connotation. On the other hand, our peers from Japan viewed fighting negatively as it brought only images of war, violence, and suffering. We were at a standstill until we recalled our conversation with Dr. Sayuri Romei, Fellow for Security and Foreign Affairs at Sasakawa USA, about the significance of Article 9 in the Japanese Constitution. Although there are many different opinions surrounding the inclusion of Article 9 in Japan’s constitution, our group came to the conclusion that the Japanese commitment to pacifism is a sign of strength. Article 9 was not only a way for Japan to make amends for the atrocities committed during World War II, but also a symbolic promise by the government to hold the importance of the citizens’ safety and well-being over the government’s own agenda.

Despite Article 9’s historical significance and large presence in Japanese political culture, recent activity and conflict in the Asia-Pacific region has opened up discussion about the possible revision or even annulment of the amendment. Additionally, the generational divide has fueled further debate about its significance. The older generations in Japan tend to be supportive of Article 9, while the Japanese students did not have the same passion for its preservation. As the discussion continued, we were able to attribute the changing attitudes towards Article 9 to differences in how the subject was taught and promoted in Japanese education.

The generational divide seen in Japanese society is also apparent in today’s gun culture debate in America. Just as pacifism was taught in Japanese schools, older generations in America were taught the importance of the Second Amendment and its symbolism for American freedom. However, as time went on, the Second Amendment has become less relevant. Additionally, the rise in mass shootings and gun violence has lit a fire underneath both Millennials and Generation Z, resulting in movements like March for Our Lives. These changes have contributed to the debate over the Second Amendment’s validity in today’s society.

Through our discussion, we were able to highlight the major similarities between Article 9 and the Second Amendment. First, they are both so intertwined with the respective countries’ culture and national identity that making any changes will require significant action. Second, the laws were created in the context of past experiences and have become less practical in today’s society. Third, while many from the older generation are heavily in favor of the law, the younger generation do not have the same conviction.

It came as a great surprise that we were able to have such a complex conversation with students from Japan. Thanks to the help of Mrs. Ayako Smethurst’s interpretation, we were able to speak in our native languages, and still have an in-depth discussion on various issues.

The ability to have these conversations highlighted the importance of bringing together the next generation of global leaders. Communication and cultural exchange is imperative between the youth of the world to promote a world of understanding, rather than misunderstanding.