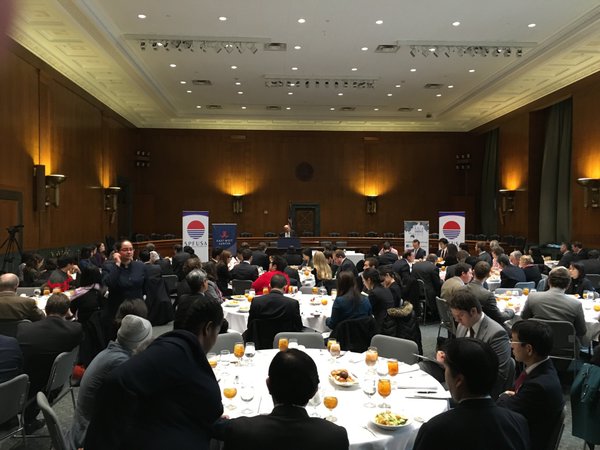 The U.S.-Japan relationship is much more than one of just government-to-government cooperation — it has great implications within the private sector, influencing everything from trade and investment to tourism and educational exchange at the national, regional and local levels. 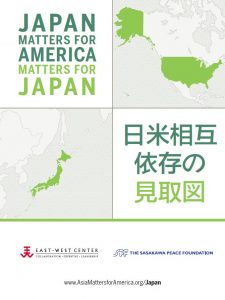 The mechanics and benefits of this relationship were discussed February 9, when Sasakawa USA, the East-West Center of Washington, D.C., the Sasakawa Peace Foundation and the office of Senator Mazie Hirono co-sponsored the release of “Japan Matters for America” — a bilingual English-Japanese publication that quantifies the impact of the U.S.-Japan Alliance through economic and social data. This interactive resource, part of the Asia Matters for America initiative, provides credible and nonpartisan information, graphics, analysis and news at the national, state and local levels. The booklet can be accessed and downloaded online.

Nearly 150 people gathered in the Dirksen Senate Building on Capitol Hill for the launch, which was co-sponsored by two Republican and ten Democratic members of Congress.

Opening speakers included Rep. Mark Takano (D-CA), Senator Mazie Hirono (D-HI), and Rep. Mark Takai (D-HI). H.E. Kenichiro Sasae, Ambassador of Japan, delivered the keynote address, which was followed by a panel discussion and Q&A featuring Kurt Tong, Principal Deputy Assistant Secretary with the Bureau of Economic and Business Affairs at the U.S. Department of State; Kanji Yamanouchi, Minister for Economic Affairs at the Embassy of Japan in the United States; and Satu Limaye, Director of the East-West Center in Washington, D.C., who moderated the conversation.

Representative Takano, a descendant of Japanese immigrants, said the bond the United States shares with Japan goes beyond geopolitics, noting the relationship “will define the future of the world.”

[perfectpullquote align=”left” cite=”Senator Mazie Hirono (D-HI)” link=”” color=”” class=”” size=””]“No alliance could be more important than the alliance between the U.S. and Japan.”[/perfectpullquote]

Senator Hirono, who was born in Fukushima, said the U.S.-Japan alliance is important to maintaining peace and stability in the Asia-Pacific and beyond.

“No alliance could be more important than the alliance between the U.S. and Japan,” she said, also noting that the impact of trade between the two countries touches every state in the union. The Japan Matters for America booklet explores this topic in depth, explaining that U.S. and Japan are among each other’s top five trading partners and that every U.S. state exports almost $100 million of goods and services to Japan annually.

Representative Takai explained that Hawaiians view their state as the “bridge” between Asia and the mainland United States — and he said the state is happy to lend its support to continuing that relationship.

“There are so many things that we can learn from the Japanese people, and from Japan,” he said, noting that programs that bring together people from each country — such as the State Partnership Program with the National Guard — are beneficial to all.

In his luncheon keynote address, Ambassador Kenichiro Sasae, Ambassador of Japan to the U.S., praised the Japan Matters for America publication for its details on how important the relationship of the United States and Japan is to both countries.

“Most things we believe we know, but this book reminds us of the facts,” he said.

He spoke on the issue of the Trans-Pacific Partnership and his optimism that it eventually be passed in the United States. Although the current political season may prevent its ratification before a new president is elected, he believes the agreement eventually will gain the support of the American people — and he called on U.S. legislators to consider the benefits the agreement offers to both countries as well as the global economy.

“This goes beyond politics,” he said.

In the panel discussion that followed, PDAS Tong also spoke on the TPP. Asked whether the agreement is likely to pass if the U.S. elects a president who is either very liberal or very conservative, he said “it’s a balanced agreement that accomplishes a lot for the American people… and that is something that should excite Americans regardless of their political persuasion.”

He said while he would characterize the U.S.-Japan relationship as “extraordinarily strong right now,” he worries whether the younger generations are as informed on the impact of the relationship. The next generation of leaders to carry that torch need to be built up now, he said, so the relationship will remain strong in the future.

“We can contribute to the betterment of the international community” by continuing this strategic cooperation, he said. Yamanouchi summarized what he thought were some of the main highlights of the event in an Econ-News newsletter. Click here to read his summary, and here to read the Embassy of Japan’s Facebook post about the event.

The event also generated a flurry of activity on Twitter. Click here to read posts with the #JapanMatters hashtag. Read the East-West Center’s summary of the Japan Matters for America event here. 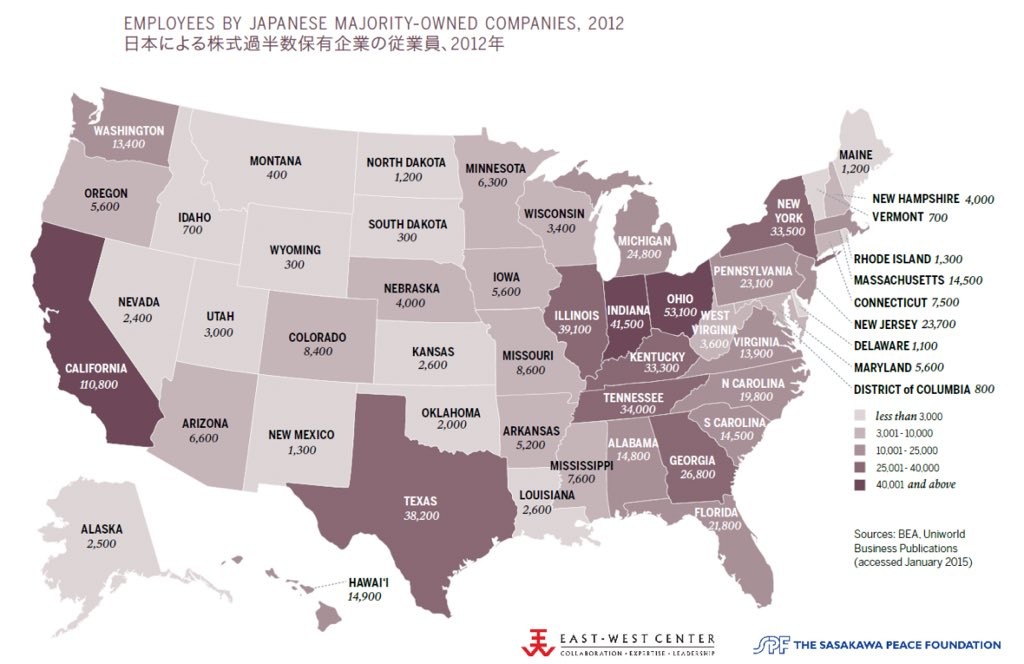 Some key highlights from the Japan Matters for America publication:

• Summary: The U.S. and Japan are global powers and allies. The relationship is one of the closest, most wide-ranging and constructive partnerships in the world. Key to the partnership’s importance for both countries and fore the world is the combination of shared values and global economic weight
• Global partnership: The U.S. and Japan work together to address pressing global challenges, such as efforts to combat illegal trafficking and piracy, global environmental protection, and humanitarian assistance and disaster relief.
• Trade: The U.S. and Japan are among each other’s top five trading partners. Every U.S. state exports almost $100 million of goods and services to Japan annually.
• Jobs: Trade with Japan supports over 710,000 jobs in the U.S. Exports to Japan support jobs in every U.S. state. Japan is the fourth largest creators of U.S. jobs from trade after Canada, Mexico and China
• Investment: The U.S. is the number one destination for Japanese investment abroad and the largest investor in Japan. Japanese firms employ over 700,000 Americans in all 50 states and American subsidies operate in every Japanese prefecture.
• Travel and tourism: Japan ranks fourth globally and second in the Asia-Pacific as a source of visitors to the U.S., spending $17 billion annually. More than 9.4 million passengers flew between the U.S. and Japan in 2014.
• Educational exchange: Japanese international students contribute $600 million to the U.S. economy annually. Japan ranks as the seventh largest source of international students in the U.S. The U.S. ranks ninth for international students in Japan, the only non-Asia country in the top 10.
• Japanese-Americans and Americans in Japan: About 785,000 Japanese-Americans live in the U.S., and 50,000 Americans live in Japan. In ten states, Japanese is spoken in the homes of more than 10,000 people.
• Sister partnerships: The U.S. and Japan share over 460 sister relationships. The first U.S.-Japan sister relationship was formed on December 7, 1955 between St. Paul, Minnesota and Nagasaki City as an act of peace marking 10 years since the end of WWII.
• Community connections: Strong community and people-to-people connections sustain the U.S. Japan relationship. Local communities have exchanged symbols of peace such as flowering trees. In times of crisis, citizens from both countries have responded with mutual respect.
• Allies: The U.S.-Japan alliance is the “Cornerstone of Peace and Security in the Asia-Pacific region.” The U.S. and Japan have been military allies since 1951. Japan actively supports the U.S. military presence in Asia which serves the security interests of both countries. 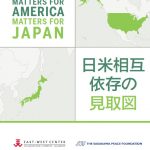 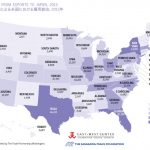 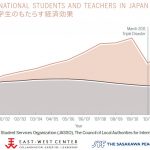 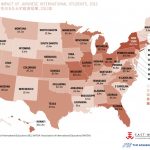 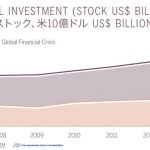 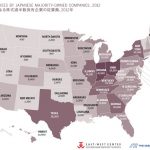 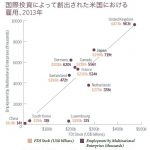 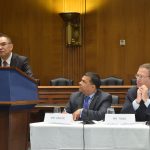 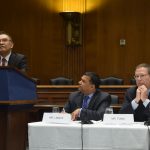 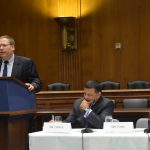 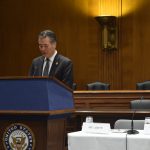 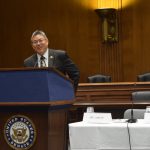 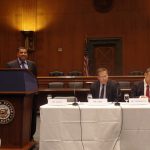 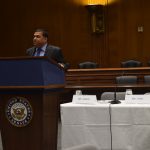 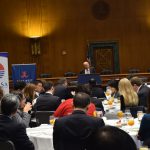 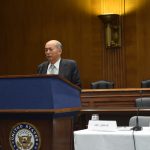 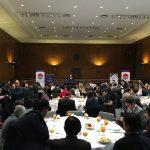 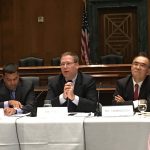 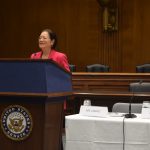 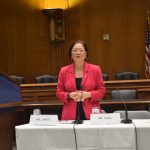