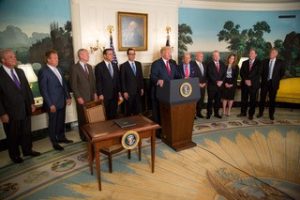 Sasakawa USA Chairman Admiral Blair (second from the left) at the signing of the Presidential Memorandum for the United States Trade Representative on Monday, August 14. Official White House Photo by Shealah Craighead.

On Monday August 14, 2017, U.S. President Donald Trump signed a presidential memorandum for the United States Trade Representative authorizing an inquiry into actions by China, such as the theft of U.S. intellectual property, that may harm U.S. innovation. According to the memorandum, “violations of intellectual property rights and other unfair technology transfers potentially threaten United States firms by undermining their ability to compete fairly in the global market.”

Sasakawa USA Chairman Admiral Dennis Blair attended the signing of the memorandum at the White House, and also contributed an opinion piece, co-written with former Director of the National Security Agency General Keith B. Alexander, on the importance of holding China accountable for its intellectual property theft. In the op-ed, Blair and Alexander state that China is responsible for the majority of the $600 billion a year in intellectual property theft costs incurred by the United States.