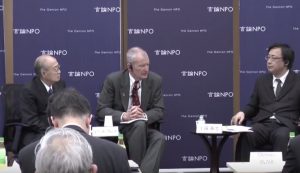 At the event, panelists described the current state of democracy globally, and the slowing spread of democratic values. Sasakawa USA Chairman Admiral Dennis Blair, for example, spoke on the need for greater vigilance in advanced democracies to ward against authoritarianism.

The forum also introduced the themes and recommendations included in “U.S.-Japan Approaches to Democracy Promotion,” such as prioritizing countries of interest, encouraging U.S.-Japan involvement in international organizations, and making democracy promotion a goal of the U.S.-Japan alliance.