Cybersecurity in Japan: An overview 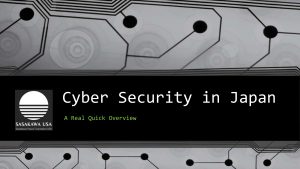 Japan has increasingly become concerned about cybersecurity in the face of increasing attacks against private and public sector targets. Cybersecurity challenges, some emanating from traditional adversaries in the region, represent a challenge to the welfare and safety of Japan’s citizens.

William “Bud” Roth, Non-Resident Fellow for Cybersecurity at Sasakawa USA, presented an overview on cybersecurity issues in Japan at “Non-traditional Security Threats in Asia,” an event co-hosted by The Council on Asian Affairs and The National Bureau of Asian Research.

In his presentation, Roth detailed major cyber attacks on Japanese websites, including a phishing email scheme that led to exfiltrated data from 1.25 million Japan Pension Service accounts; and attacks that took down websites including those for the Narita and Chubu airports, Prime Minister Shinzo Abe, Nissan, and the National Tax Agency. These DDoS attacks against high-profile targets are recognized as a serious risk to national security, and Roth detailed GoJ Cybersecurity strategies that have been adopted along with efforts to prepare for the upcoming 2019 World Rugby Cup and 2020 Olympics. These strategies represent positive movement, Roth said, but Japan still has much to do to fend off adversaries in the cyber domain.