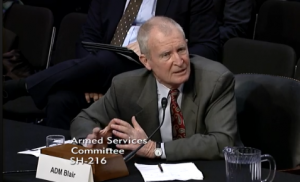 Admiral Dennis Blair, Chair of Sasakawa USA, testified before the U.S. Senate Armed Forces Committee on January 30. Blair was a witness for a hearing on the “Situation on the Korean Peninsula and U.S. Strategy in the Indo-Pacific Region.” Blair is a former Director of National Intelligence and previously served as Commander in Chief of the U.S. Pacific Command.

Blair told Senators that there are at least five common misconceptions about North Korea that are making it difficult for policy makers to come up with an effective set of actions.

As for sanctions, Blair doesn’t believe strict sanctions have ever been attempted against North Korea. “It will take a sustained intelligence and diplomatic effort to build international sanctions that will cause real pain to North Korea’s leaders, but it has not been done yet.”

Blair also warned against the misconceptions that Korea will never give up its nuclear weapons, that time is on North Korea’s side and that American policy towards North Korea has failed. “To judge American policy on the Korean Peninsula by its failure to achieve one of its many objectives, prevention of a North Korean nuclear capability, is both narrow and dangerous,” Blair said.

Finally, Blair stated that it is a misconception that the U.S. has no policy choices but to attack North Korea. “In fact, building on what it has learned in dealing with North Korea over the years, the United States has many policy choices,” Blair said, including strong economic pressure. Blair also advocated for pushing more information into the isolated nation to counter the barrage of government propaganda that North Korean citizens are subjected to. “Finally, the kryptonite that can weaken North Korea is information from beyond its borders,” he said.

A discussion followed the formal testimonies, with Admiral Blair and the other witnesses fielding questions from the Senate committee members for more than an hour.